Here are some potential democratic Presidential candidates for 2020.

ATLANTA (AP) — Several prominent Democrats who are mulling a bid for the White House in 2020 have sought to bolster their progressive credentials by calling for major changes to immigration enforcement, with some pressing for the outright abolition...

“Any Democrats who want to be the nominee need to stand on the right side of this,” Stamp said. “Even if they don’t say ‘abolish ICE,’ they can’t not address it.”

Angel Padilla, policy director at the grassroots group Indivisible, said ICE “terrorizes communities” and that Gillibrand’s move “demonstrates where the progressive base is.” They fear the phrase makes them an easy target

Since it’s very difficult to run against a sitting president, desperate candidates could take desperate strategy to boost their chance.

“Abolishing ICE” helped the 28 year old Latina to upset the #4 Democrat Joe Crowley. I guess many ambitious democrats are taking notice and rushing to the movement. NY senator and MA senator are much more progressive on this push than CA senator, probably because Crowley is in NY, and they are very familiar with this surprising win.

If these wacky progressives run , Trump will be re elected. He won on immigration and is just carrying out his mandate. The US is a nation of laws . Illegal immigrants are not a protected class except in SF.

I bet Elizabeth Warren will get the Democratic nomination. She will lose to Trump.

Biden will win nomination most likely

Poll: Biden would beat every other Democratic candidate in a one-on-one race

Democratic presidential candidate, former U.S. Vice President Joe Biden speaks during a campaign kickoff rally, May 18, 2019 on Philadelphia, Pennsylvania. Drew Angerer/Getty Images A new poll suggests there might not be an anti-Biden vote to...

Hillary was in the same position in 2015. No guarantees

With the Cali primary moved from June to March’s "Super Tuesday, many candidates are going to be coming (finally…) to the Golden State to campaign. During 2016 I attended a Bernie rally. Pretty interesting to experience - the passionate crowd, the unedited stump speech, etc.

If Candidate X were to come to your town in the next few months, would you take a day off to attend? If so, who is your Candidate X list?

Full disclosure - I’d attend another Bernie rally. The rest bore the living scat out of me.

Do you support Bernie?

I think Biden will be nominated

I don’t support Bernie, but really really hoped we’d see a Bernie / Trump general election during the 2016 cycle. That kind of radical “A/B” choice would have been interesting to see. As I think Jefferson said, “every so often a little revolution is a good thing” - a paraphrase at best. Unfortunately Bernie was thoroughly boned by HRC’s cabal at the DNC as we have come to find out. It’s going to be Biden and Harris as VP. (blegh… Harris is such a terrible person, but Biden has to balance the ticket)

Still I’d go to a Bernie rally only for the “event” it represents. A deadly serious Socialist/Communist running for POTUS who had a chance (2016) and may still in 2019. I support nothing that Bernie is peddling, but I absolutely admire his commitment to his cause. One could only wish for Bernie’s level of honesty in all of the 2020 candidates.

Bernie is a gadfly and bullshit artist. He has absolutely no specific plans on how to achieve a socialist utopia. He just parrots 60s rhetoric. Not an original thought in his head.

He, and those who support him, need as much disinfecting sunshine spotlighted on them as possible.

Trouble is though that most of the 236 other candidates quietly support every program The Bern does. I like that Bernie is vocal and clear about “theft of other people’s money” rather than the majority others in the disingenuous Left. Give a forum to the radicals like Bernie so that the cowards that won’t go “full Socialist” can see how goofy, and anti-American, their ideas are in the open court of public opinion.

This is straight up amazing. Bernie is always attacking Amazon as paying starvation wages. Amazon’s minimum wage is $15/hr, and Amazon warehouse associates get paid overtime. Bernie makes his people salaried, so there’s no overtime. They figured out they were making less than $15/hr.

Democrat presidential candidate Bernie Sanders announced this weeked he would cut staffers' hours so that they would effectively be paid a $15-an-hour minimum wage -- prompting mockery from critics who say the move is more evidence that Sanders'...

Bernie makes his people salaried, so there’s no overtime. They figured out they were making less than $15/hr.

In Bernie’s calculation as long as it’s other people’s money(i.e. tax money) there is inexhaustible supply of it

Bernie has always been a hypocritical asshole. Like all socialists. It is all about political power.

There a ton of good economic data in this. It’s amazing when people research the facts vs rely on emotions.

The Massachusetts senator's alarm-sounding about consumer debt neglect to measure it against the growth in the economy and the ability to pay.

She is a menace. The church lady thinks can lecture us into prosperity. She is a downer. The Democrats need an inspirational leader not her.

When they talk about the rich paying their fair share, someone should show them the graph. 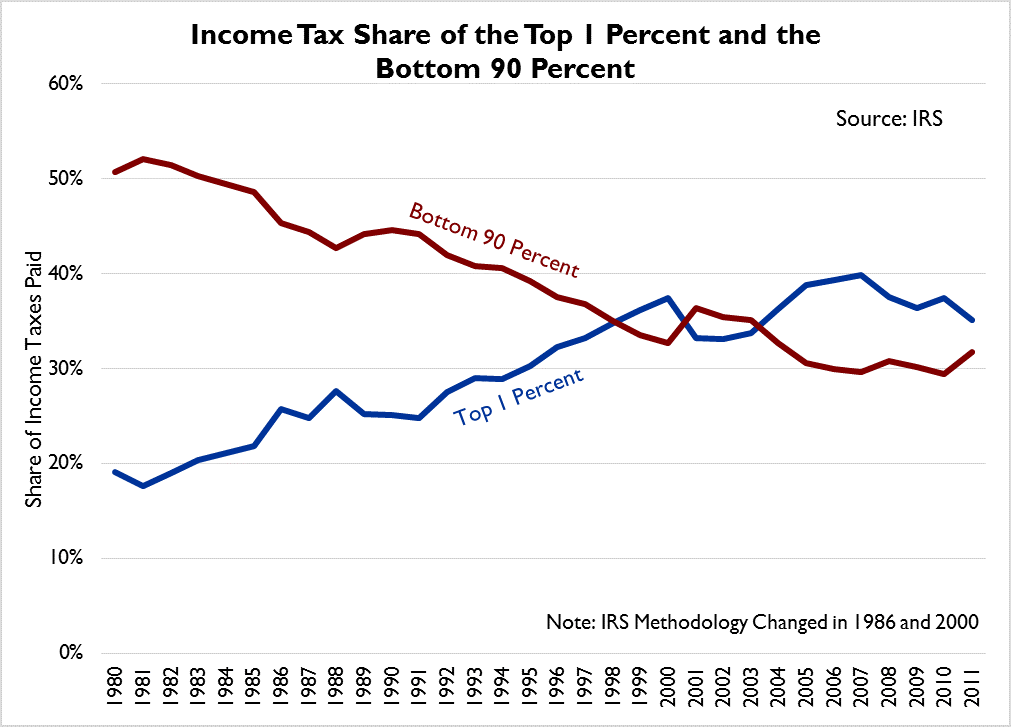 Do you have more recent graph?
The graph indicates that top 1% is paying less since 2007 whereas the bottom 90% burden started to increase since 2010.

I didn’t see one but I was searching on my phone which is a pain. It’s definitely worse now with the doubling of child tax credit though.