CAPITAL GAINS WHEN SELLING A HOME With some exceptions, a married couple filing their taxes jointly can exclude up to $500,000 in capital gains on the sale of a home, as long as they have used it as a primary residence for at least two of the last five years. A single individual can exclude up to $250,000. The House and Senate both proposed to make this rule more strict, but neither provision prevailed, and the rule will remain the same.

Another win for capitalists!

Um… I don’t think this has anything to do with capitalism prevailing. Capitalism doesn’t have tax minimization as a goal.

God, I did a search in the whole Bill… I think the key is the very last “Conference Agreement” which is NO PROVISION!!! 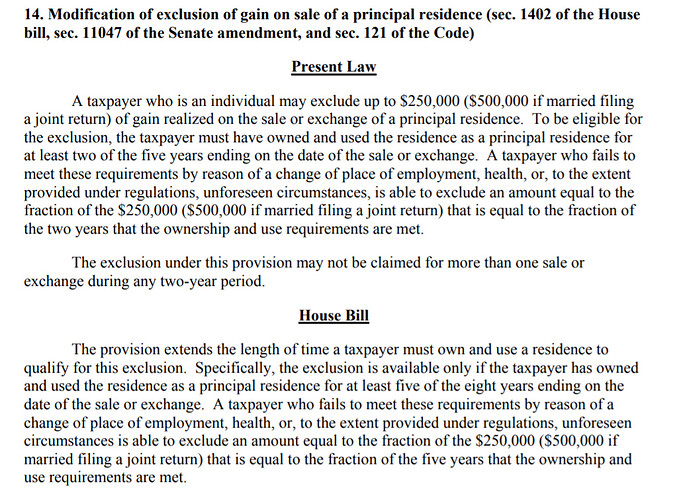 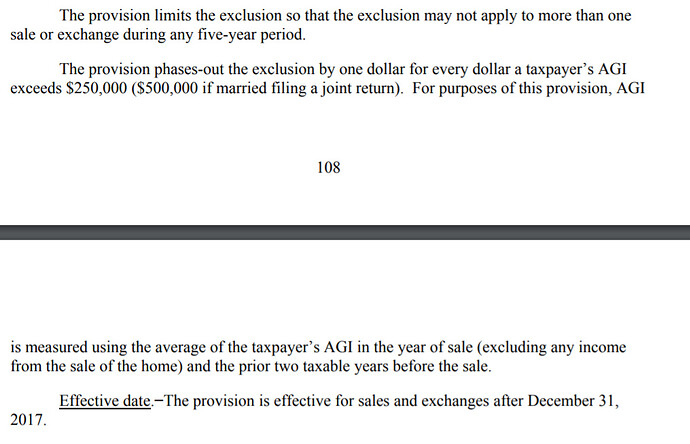 Capitalists, not capitalism. There are workers in capitalism too. Those minions are the ones who get screwed.

Now can @sfdragonboy check if the SALT is really gone? Maybe it isn’t?

Come on, the ONLY reason why I (why are you up?) am up at this ungodly hour is because again wifey is gone. I was off yesterday so took care of Oakland matters so I can sleep in today. All I cared about was the capital gains exclusion since it will be coming up for me soon. You cats are on your own…

I was up doing some catch up reading on seeking alpha, as hardworking capitalists do late at night apparently.

This tax bill is looking up. Still can’t stand Trump though.
If he gets impeached will the tax bill survive a Democratic Congress??? Probably as long as Pence is president

This tax bill is looking up. Still can’t stand Trump though.
If he gets impeached will the tax bill survive a Democratic Congress??? Probably as long as Pence is president

Tax bill will be signed before Christmas ! Trump said it is Christmas Gift to people !!

I will stop complaining. But still looking into Nevada residency…

Not a problem with anything regarding taxes.

Back to reality.
You want to enjoy the capital gains that you are going to be paying to uncle Sam, just let me know. No need to use 1031, which by the way, I hope you knew, it is a tax code, like 401K. I can help you to defer them for 30 years. Then we’ll show you how to multiply it 4-5 times when the 30th year arrive.

I am helping this individual owning 20+ properties. He wants to sell them one by one, then, he will buy a mall with the proceeds. Not bad for 1.5% commission doing nothing but guiding him to the attorney servicing this program.

If you weren’t that negative, and swing by my office, you would hate anything real estate. Believe me. My mentor owned 30 properties, sold them all. Now he makes $30K-$50K+ every month without the usual calls at midnight for a darn leaking shower head or a garbage dispenser not working.

Be positive, time is the essence, and if you can’t enjoy life because you are tied to the calls for any maintenance issues, or asking for the rental payment every month, good luck to you.

By the way, you don’t need to move anywhere. All you need is to know how to use tax loopholes.

At the end of the day, money rules…

Exclusion Of Gain From Sale Of Your Home. Under current law, you can exclude up to $250,000 ($500,000 for married taxpayers) in capital gains from the sale of your home so long as you have owned and resided in the house for at least two of the last five years.

Under the conference bill, there will be no change from current law.
Both House and Senate bills would have changed the “two of five” rule to “five of eight.” Additionally, the proposals would limit the use of the exclusion to one sale every five years (instead of one sale every two years) with one key difference: Under the House bill, the exemption would have been subject to phaseout based on income.

I will stop complaining. But still looking into Nevada residency…

It says "“Pass throughs” are business entities that don’t pay corporate income taxes, like partnerships, LLCs and S-Corporations. Instead, they “pass through” income to partners, who then pay personal income taxes on the money they receive. The Senate version of the tax bill would have added a 23 percent deduction for income from pass-throughs to the tax code. The new reconciled tax bill shrinks that deduction to 20 percent but, in a last minute change, added a new way around restrictions that would have kept pass-throughs with large income but few employees from benefiting.

The new bill still has the same income provision but adds a loophole: depreciable property. So instead of being being able to get a large tax cut only if you pay a lot of wages, now you can get the tax cut if you own a lot of property."

What is the final Pass Through S-Corp tax? 20% ? In that case, it encourages everyone to buy home through LLCs or S-Corp…

Already own a house there. Problem is my rentals are in California… still have to pay California state tax on those even if I move out of state… 1031 is the only exit strategy.
Buy my whole profolio and leave the BA rat race behind…

Selling premium real estate and opt for the desert???