Lifted this article by Matt Levine from Bloomberg. I copied and pasted the relevant parts. Original here:

I think sometimes about how Anthony Scaramucci compared the Department of Labor’s fiduciary rule to Dred Scott, the 1857 U.S. Supreme Court decision protecting slavery and ruling that African-Americans can’t be citizens. "The left-leaning Department of Labor has made a decision to discriminate against a class of people who they deem to be adding no value,” said Scaramucci, a fund-of-funds marketer who was also an adviser and spokesman for Donald Trump’s campaign. And he said that, if Trump were elected, he’d repeal the fiduciary rule.

Trump, meanwhile, never said that. Instead he promised to ban Muslims from traveling to the United States. Scaramucci tried not to think about this: “I’ll make a prediction right now that he will not put a ban on Muslims coming into America,” he once told Gawker. Did he believe that? Or did he think that the Department of Labor rule requiring financial advisers to put their customers’ interests ahead of their own is the great moral evil of our time, comparable to slavery, and that a ban on Muslim immigration was an acceptable trade-off to end that evil?

Now Trump has his Muslim ban, sort of. On Friday – Holocaust Remembrance Day – Trump issued an executive order banning people from seven Muslim-majority countries from traveling to the U.S. The ban covered U.S. lawful permanent residents who have spent years following the law and building lives here, interpreters who heroically helped the U.S. military, children of U.S. citizens, dissidents who fought hostile regimes, scientific researchers, Syrian Christians, British Olympians, and endangered refugee children who were carefully vetted to be allowed into the U.S.

But you know what Trump hasn’t done yet? Repeal the fiduciary rule! Or even talk about it. Its future remains uncertain, and while there is a good chance that it will eventually be repealed, big brokerages are moving to implement its changes now anyway.

This is a widespread pattern. Many people in the business and financial and technology communities listened to what Trump said, and cheerily assumed he’d do something completely different. Sure he talked about restricting trade and banning Muslim immigrants, but what they heard was that he’d enact “sensible immigration policy” and pro-growth trade agreements, reduce taxes, cut back regulation and generally improve conditions for business. As I said in November:

And what has happened so far? Immigration bans (with more to come), abandoned trade agreements, “alternative facts,” unprompted promises to bring back torture. And what has not happened so far? Tax policy is a complete mystery, with an unclear and walked-back promise to impose a border tax. Health-care policy is even more mysterious. Trump has made vague promises to cut regulations by 75 percent, but his specific regulatory focus seems to be on increasing penalties on companies that move operations abroad. Everything Trump literally said is coming literally true; everything the serious people heard remains an unserious hope. Businesses may eventually get the tax and regulatory reform they wanted, but it’s not a priority. The technology industry, and some others, are beginning to figure this out:

Trump has “had this extraordinary honeymoon where Wall Street has kind of discounted all the negative aspects,” Richard Fenning, the CEO of consultancy Control Risks, told Bloomberg Television. As companies react to the migrant ban, “perhaps that honeymoon is starting to be over,” he said.

More than that, though. One upshot of Trump’s executive order is that United States lawful permanent residents, who have jumped through years of hoops to comply with the intricate immigration rules enshrined in U.S. law, are no longer protected by that law. They can be deported at the whim of the President, or his advisers, or a Border Patrol agent. (The order originally barred lawful permanent residents, though after some confusion, now it will not, unless the Secretary of Homeland Security wants it to. On the other hand, soon it may apply to citizens.) The nation of laws that they immigrated to is gone, replaced by a nation of arbitrary rule.

Fact check: permanent resident is allowed to enter the country from those 7 countries.

Sorry for posting so much Trump stuff here. But it should be clear to everybody Trump is everywhere in people’s decision making. From important ones like “should I buy a house?” to mundane ones like “can I go out of the country to visit my parents?” Multiply this by millions of people and we get a major economic problem.

Hope it could come, depending on who and how many Supreme Court judges he can appoint.

At least many SF stupidvisors will be busy attacking the new president. If stupidviosrs are busy and have no time to squeeze citizens, we the people will be happy ever after.

Stupidvisors are totally worse than nothing. Hope the guy will keep the stupidviosrs busy with attacking, protesting, shouting,

California state legislators on Tuesday advanced a bill that would make the entire state a sanctuary for undocumented immigrants, in defiance of President Trump’s stated plans to deport millions of people.

It’s not election season, now is the time to relax

Dalio, who in November was bullish on the incoming president’s ability to stimulate the economy, is now saying he’s more concerned that the damaging effects of Trump’s populist policies may overwhelm the benefits of his pro-business agenda.

“We are now in a period of time when how this balance tilts will be more important to the economy, markets, and our well-beings than normally dominant drivers such as central bank policies,” Dalio and co-Chief Investment Officer Bob Prince said in Bridgewater Associates’ “Daily Observations” note to clients on Tuesday.

This line is golden. Remember it:

Honeymoon officially over. The shortest honeymoon in history.

“Bridgewater Associates, based in Westport, Connecticut, oversees $160 billion in assets. It returned 2.4 percent in its Pure Alpha II fund last year, overcoming losses in the first half.”

What honeymoon? Protesting never stopped from one year ago to today. Huge protest before and after the inauguration, there is only bittermoon, no honeymoon at all.

If protesting is every day and you get protest no matter what, do you think he would pay attention? People will be saturated with protests and just ignore it.

I think what happened is inevtitable. If it was not Trump, it would be someone else. If it was not today, it could be 4 years later. There is no escape, people are not happy with the politics, they want a change or at least a correction. It would be help the left of they use some moderation and change their fiercely attacking style

This line is golden. Remember it:

Honeymoon officially over. The shortest honeymoon in history.

I don’t know if the democrats are in denial or what, but Trump is doing what he’s been saying since 2015. I still don’t regret voting for him; probably the best vote I’ve ever cast.

Fact check: permanent resident is allowed to enter the country from those 7 countries.

Now, only after protest and a court order. Green card holders were turned away previously. If Trump had actually gotten someone with a brain to look at his EO he could have avoided the fiasco. Of course, maybe that was his intent all along.

Read this article and tell me you are not scared:

Steve Bannon, one of President Trump’s most trusted advisors, has said Islam is “the most radical” religion in the world and the U.S. is engaged in a civilizational struggle that could lead to a "major" war.

Bannon wants to wage war against Islam the religion and China. That’s, oh, half the humanity. It’s my ultimate bear case. I really hope it doesn’t happen. 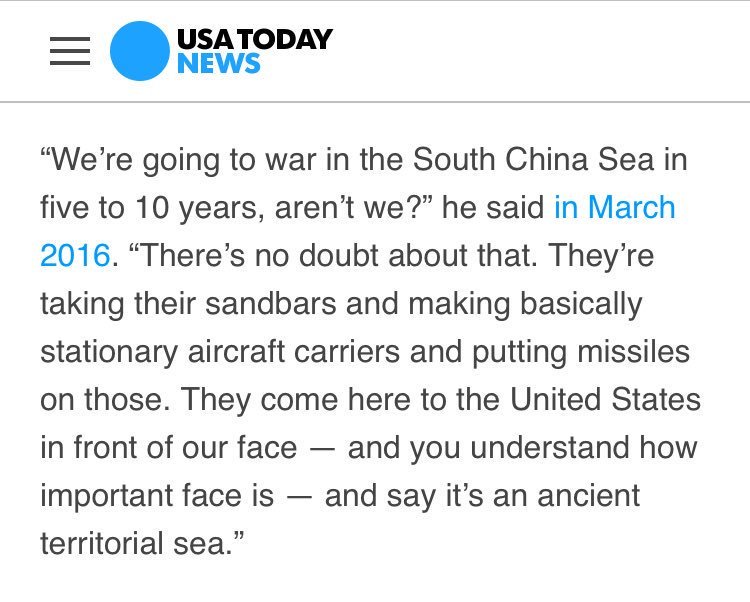 Yes, Steve, I understand how important face is. We all do. Now just chill out and don’t forget to take your medication.

1/Everyone is rightfully talking about the vile Muslim Ban, but I want to take a second to talk about the possibility of war with China.

2/The Trump administration has been making increasingly bellicose noises toward China: https://t.co/QzVD8OZIV8 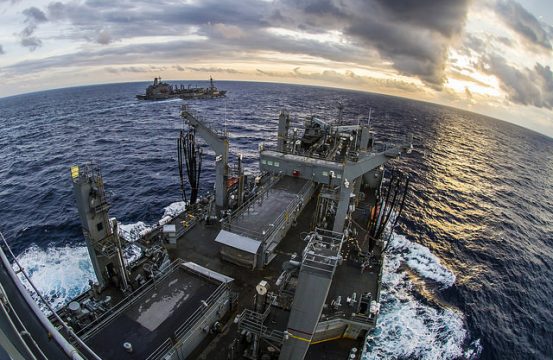 “The world should now get used to a president and administration that speak first and (maybe) think later.”

3/That bellicose rhetoric has been matched by the Chinese: https://t.co/wv98uLbzWy

Chinese military official warns that war with US under Trump is becoming a...

"The Taiwan question" is a core interest to the country, which could push a more aggressive response as the US supports independence and more weaponry.

4/Now think about Trump's objectives. At this point, it's pretty clear that he wants, above all else, to consolidate his power in the U.S.

5/If he keeps making unpopular and scary moves like the Muslim Ban, opposition will harden, and conservatives will join that opposition. 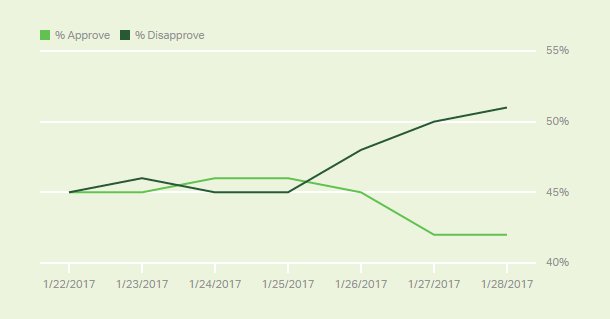 5/Trump's approval rating has been falling as the American people realize what a big mistake they made: https://t.co/gXJIvcmlmn 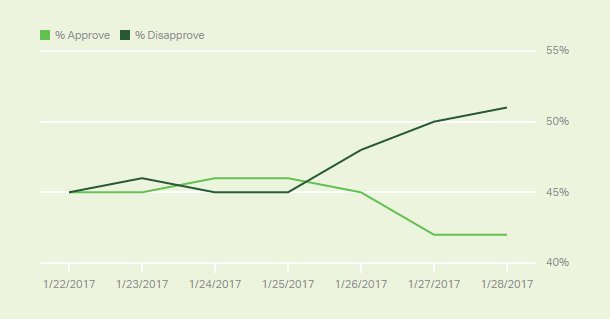 6/Besides an election, there's only one thing guaranteed to raise a President's approval rating and consolidate his power: War.

7/If Trump engages China in a limited naval battle and comes out victorious, his popularity and power are basically assured.

8/But a loss in a limited war could also suit Trump's purposes to a great extent!

9/A loss to China would enrage the American people, who, like all populaces, HATE to lose wars.

10/But Trump would use a "stab in the back" narrative - that we only lost because we were betrayed by the media, liberals, and minorities.

11/Trump would respond to a war loss by cracking down on the media and prostests, discarding democratic checks and balances, etc.

12/In fact, a war would be a much better way of "wagging the dog" than a terrorist attack - Trump could start or provoke one easily.

13/There are risks to this strategy, of course. Nuclear escalation. Or the country might not buy the "stab in the back" story.

14/But a war has the added advantage that there's little way to pre-empt it. Antiwar protests will just feed the "stab in the back" story.

16/What can we do to reduce this danger? I think the key is to preemptively oppose not the war, but the "stab in the back" narrative itself.

17/Warn everyone, including the military, about the potential for a "stab in the back" story after a bungled war.

18/If Trump knows he won't be able to use a "stab in the back" narrative to use a war loss to his advantage, it increases the risk of war.

If you voted for Trump in California your vote didn’t count…I voted for Gary Johnson, just can’t stand the orangeman…But the fact that he is pissing off liberals is worth it…And scaring traditional centers of power is good too… republicans and democrats that are part of the Washington shit machine need to shaken to their core…

Doesn’t matter; the intent is what matters to me. California is a lost cause.

It’s less than 2 weeks since trump became president, but it seems that his reelection chance is now over 90%. Most of his policies are not even announced yet. He seems to understand the art of politics, even though he is a new politician and he is not familiar with the Washington mechanics.

I hope to dear God that everything works out, but I have to admit, I like his style. Just get things done!!! No dilly dallying around… sure, probably should have vetted fully the travel policy and cascaded that down to the guys/gals on the ground. He wants to get things done and I don’t blame him. Shoot, our freaking Stupidvisors could learn a thing or two from The Donald…