All cities worth living in are liberal.

Liberal is no longer the term meaning it used to be…Now it stands for intolerance and nimbyism…Nice, France, next to Monaco has been conservative for years and is probably one of the most livable cities in the world…

In every society, there would be a sandwich class. Try not to stay there for too long.

No city can afford liberal politics for long…Look at Chicago, Detroit democrats in control for 60 years…hardly livable

In the early stage of liberalism, it did some good things. But in the process of fighting for the good, liberalism has become over reaching and overly aggressive. Liberalism today is a pit pull who attacks American people for the benefit of a few fake elites. They disallow speech freedom. They want to employ the pit bulls to attack everyone who has courage to tell the truth.

Libertarianism Is the future. Liberalism is dying.

All cities worth living in are liberal.

How much poop and piss is on the streets of SF? That’s straight up 3rd world conditions. Detroit was once a proud liberal city too…

How much poop and piss is on the streets of SF? That’s straight up 3rd world conditions. Detroit was once a proud liberal city too…

Still all the hottest tech companies in the world want to be in SF. So many rich people want to live here the housing price is among the highest in the world. There must be something beyond the poop and piss.

Seriously though, which of the top 20 American cities is NOT liberal? Curious to know.

Who are the top 20 cities? By what criteria?

Suburbs have been where people want to live. Cities are just getting popular again. Before the cities became liberal, wealthy and middle class live in the cities. After cars became mainstream, cities have become a place for the poor and the non traditional liberals. Now, professionals start to come to cities.

Cities getting expensive to live in is exactly the same as saying they are desirable. Maybe not to some people, but certainly to enough number of people to push prices up.

Maybe. I used to be a libertarian myself. I now find its ideas too naive for our complex world. It’s more like “market-fundamentalism”. Like anything fundamentalist, it’s not a good fit for reality.

It’s not going to get better either. There’s one thing here that’s smart. I-5 has “express lanes” which change direction depending on the time of day. It’s a way more cost effective way to reduce traffic. You don’t need to build more lanes in both directions. They just built them in the middle, so they add lanes to the direction with the most traffic. Most cities have definitive traffic patterns where most people commute in the same direction.

Didn’t anyone read the articles… they aren’t about cities in general, but those metro areas where people earning middle-range incomes have been priced out. Not surprising where they have to compete with growing numbers of high income earners (mostly blue).

If there are regulations making new home building hard, why is this a surprise at all? It’s exactly what we should have expected from the heavy regulations. They have regulated middle people out of the blue metro and expelled the middle people to red metros so that blue metro can be reserved for high income and low income people.

Regulations are only a part of it. Escalated home prices in the bay area mainly reflect bottlenecks that have occurred where housing hasn’t adjusted with the growth of local economies.

Actually, when you look at this map of where the talent pool (and corresponding economic growth) is moving, it is to metros in purple and red states. This is what drives change (and prices) in these areas. 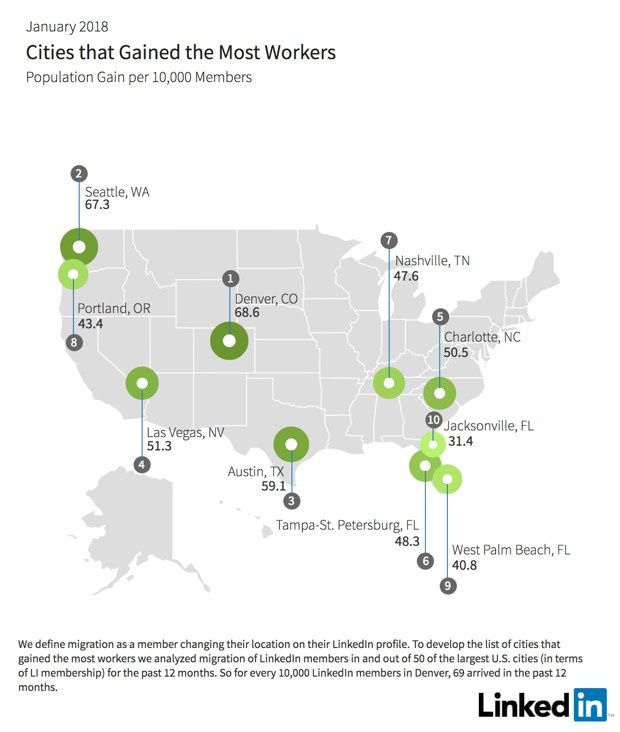 Ultimately, there is some evidence of a talent shift from expensive coastal cities like New York, San Francisco, and L.A. to large Sunbelt metros in red and purple states. Over time, this transition may even be accelerated by Trump’s tax bill. Still, such a shift will do little to change America’s deepening spatial inequality.

Just shedding light on factors that make some metros expensive, and how they might become less affordable to middle income people with growth.