Overview.
Neighbor always parks in street parking in front of our house. Occasionally, does not remove it even during trash days. However, he makes sure that he has an empty space (no car parked) right adjacent to his house to keep his trash cans out on the trash collection day.

I have 2 cars & cannot retaliate by blocking the parking space with my cars , & I do not want to do it either as I don’t need this parking space except on trash day.
I have talked to him & his family twice about this and his behavior shows that he perfectly understands the need for space to keep the trash cans for his own household while he doesn’t want to extend the same courtesy to me.

I do not want a nasty fight but I want to make sure that I don’t have to remind him every few months on this.

Qn: What can be done in this situation? 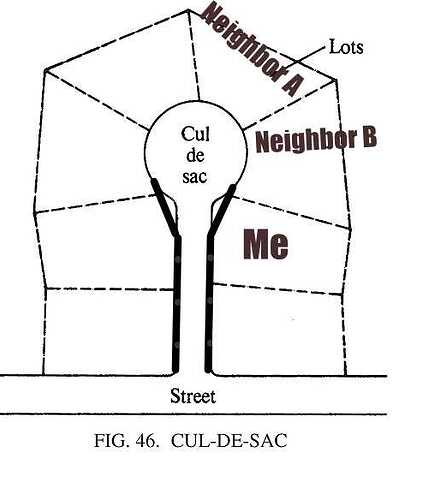 I’m no expert but I wonder if you can just buy a cone from Home Depot and put it there to reserve your trash can space.

Hold on, these are PUBLIC street parking spaces correct? You have no more right to the space than anyone does. It would nice if your neighbor did as you asked but he/she doesn’t have to.

(Ok, now sell me your house if you plan to move because of this…

I actually don’t want to do this, but I am thinking of publicly shaming this neighbor by placing a banner in my front yard saying “Kindly refrain from parking here during trash pickup days”, & everyone in the neighborhood will be able to read it & understand what & who I am talking about.

I have found that in Fremont there is a law which prohibits a car being parked at the same street parking for more than 72 hours. This might not mitigate the long term situation as he has 4 times the number of cars that I have & I can’t spare any cars. I need to find out more about other laws if any.

The $(non optimal) solution is to buy a $2000 car and keep it parked there for 3 days and rotate it after every 72 hours.

Why do you care so much? I am assuming they don’t refuse to pick up your refuse because of it.

Hold on, these are PUBLIC street parking spaces correct? You have no more right to the space than anyone does. It would nice if your neighbor did as you asked but he/she doesn’t have to.

(Ok, now sell me your house if you plan to move because of this…

Well, there are still things you could do on Public street parking. Our neighbor called the police on my brother’s car because his bumper encroached on his driveway by a few inches… The neighbor’s driveway is wide enough to fit like 2+ cars… He was just over by a bit since he didn’t want trap the car in front. Bro got a ticket.

Bro’s van was towed because that neighbor again called the police. The police marked his tire but my bro didn’t move his van since he didn’t know about it… Now that was expensive…

Could you just place the bins on Your driveway area? Or is this more of a matter of principle?

The $(non optimal) solution is to buy a $2000 car and keep it parked there for 3 days and rotate it after every 72 hours.

That’s a lot of work just to get some trash can space…what’s wrong with keeping your trash can on the edge of your driveway for the night? I’ve done it multiple times when someone blocked my street parking…

Why do you care so much? I am assuming they don’t refuse to pick up your refuse because of it.

The trash pickup guy has to get down from his truck to push the cans close to the truck because he is concerned of damaging the cars parked near the trash cans & he told me to keep cars away. For him it’s a wastage of his time everytime.

Or is this more of a matter of principle?

Additionally, he is quite clear about his own street parking space + trash pickup space, but not of others. I would expect he should first parallel park his car & trash cans instead of expecting it from others.

Report him to the Police for any infractions like parking his car there for than longer 3 days.

You said he has an in-law unit so maybe check the planning department to make sure his permits are in place. Maybe he had some work done without permits?

Called and confirmed the 72 hour law in Fremont and also got the phone number to call for enforcement.

Mulling on next steps.

I would suggest you to study his demeanor, and act accordingly. As soon as he parks his car on your spot, report it online. Even if you miss once or twice, he will get the idea the day his car gets tagged.

To tell you how hard it is, my friends across the street violate my parking space. They know me, but they do it to pull my legs. I’ve told them that on Wednesdays, no use of my parking space because sometimes I trim my few trees on the backyard, besides that, they think that owning a small car allows them to park it there by just moving back or forth the cans. But I love them anyway, no hard feelings.

Though, they know, and I have told them, that if their car is parked there for more than 3 days, they will get either the red tag from traffic enforcement, or, you know, not trying to suggest anything mean, but flat tires are a daily occurrence, you never know where you got that screw in your tire. Or the strange people out of this area scratching cars

2-3 months ago, this truck, used for agricultural purposes appeared in front of my house. It was Wednesday, the day before pick up day. It was so long and bulky it was hard to leave our home because of the lack of visibility. I was frustrated by I understood they had the right to park there. Thursday, Friday, Saturday, Sunday and the truck? Still parked there. It had a plastic container on the back, which, for some magic reasons ended up with lots of my 2 dogs poop and trash “somebody threw in there in the middle of the night”.

I’ve seen the truck parked half a block away, he never tried to park here again. I am still trying to find the evil guy who threw trash in that plastic container.

The day before pick up time, put your cans outside on your parking space. Then, I haven’t done it, I would like to find out, but I believe the garbage cans are your personal property and can’t be moved by anybody but you.

Do your diligence by finding out and do the appropriate move.

Then, I haven’t done it, I would like to find out, but I believe the garbage cans are your personal property and can’t be moved by anybody but you.

My trash gets picked up early morning and in some cases afternoon(lately), surprisingly I have come back home in the evening and found my empty trash cans on the sidewalk(moved by the neighbor to keep his car/s) . Hence, I need to find out if trash can is a personal property thing. I do know in some cities you can’t keep the trash can on the street parking for more than 24 hours. Need to confirm that for Fremont.

I was going to suggest some sabotage like @buyinghouse did. Maybe just a deflated tire (not cut) to the bone. If not that, how about this angle with the inlaw? I am assuming it is “common knowledge” that he has an inlaw and is renting it out? If so, well, is he reporting that income on his taxes? Perhaps Mr Lame Neighbor needs to be reminded of that. Hate to have the IRS contacting you for a good old AUDIT. Just sayin’…

2 close relatives have temporarily(for 1 year) moved to East Coast and their cars are here. They don’t need their cars there. I might be able to use one of their cars to block this space in the future.

I might just borrow an old jalopy from someone and take his prized space one week. He should get the message after that, right?

I’ll make sure I keep one of my cars which his old at that place.

If you report the car being parked for 72 hours, and your neighbors car gets towed or ticketed, they will know it is you. And you’re going to live next to these guys for years. Not worth it.

And it is public street. Doesn’t matter if it outside your house, others can park their by law.

Just put the garbage can in the middle of your drive way by the street on collection days. When you leave and come home, just spend extra 2 minutes to double park, move the bins, get into drive way.