Although nothing has been passed yet, at least PA is willing to explore new zoning for affordable housing. Gosh, if this happens, what next? Maybe, our fearless leader going all bill paying electronically? Well, one miracle at a time…

Three years after it suffered a stinging rebuff from Palo Alto voters, the city's leading affordable-housing developer is preparing for a comeback. On Monday, the City Council signaled that it's ready to welcome Palo Alto Housing back, even if it...

We need to stop this affordable housing non-sense. A few people will win the lottery and get to live there cheap. It won’t help everyone else that can’t afford housing. We need to build housing to keep pace with job and population growth. That’s the only thing that’ll help a broad number of people. The state should step in and mandate a ratio of housing per office job on new developments. We build 1 home per 8 jobs. It should be more 1 home per 2 jobs. So you build office space for 100,000 people then you better be building 50,000 homes too.

Should zone area around BART/ Caltrain stations for high density housing such as condos and apartments, of at least 10 stories high. 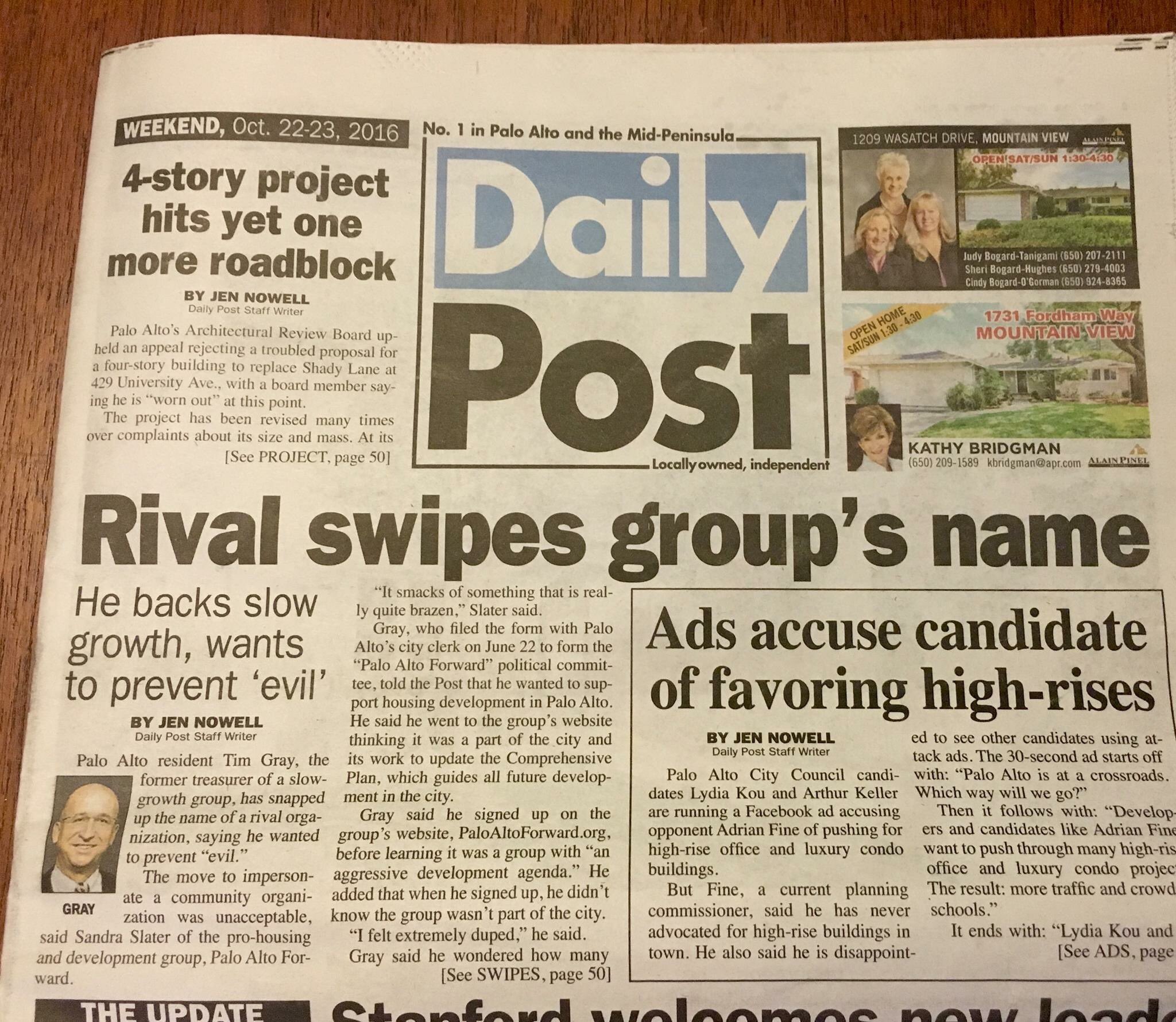 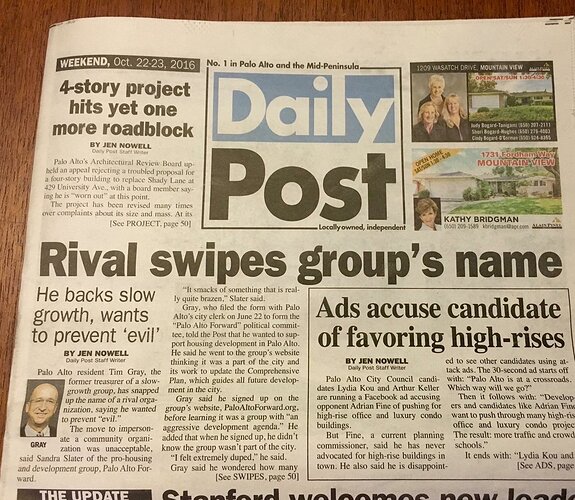 My guess is the PA council will OK some token development say 10 or 20 units and say they have done their share. Back to business as usual.

Well the governor had a plan but the unions and others shot it down.

@marcus335, your ideas are good ones. I just wish some cities would follow that or are made to follow that.

OMG, the possibility of more housing and less stressed teens in PA???

The Palo Alto Unified Schools Superintendent says a blue ribbon committee will work on developing a comprehensive GPA weighting policy to be done by April.

OMG, the possibility of more housing and less stressed teens in PA???

Weighted GPA makes A (in AP or honor classes) 5.0/4.5 insread of 4.0.
Lynbrook doesn’t provide weighted GPA either and GPA max is 4.0.
However, many kids still take 5-9 AP classes, which i don’t understand…

Well, if they go back to unweighing the GPAs, presumably the kids would feel less pressure…I know, Tiger parents ain’t hearing it…

many kids still take 5-9 AP classes, which i don’t understand…

Most AP qualifies for exemption in college. With sufficient APs, can reduce the length in college by 1 to 2 years.

My coworker once went to some college counseling seminar given by a Cupertino Chinese guy. It’s really hardcore if you want to get into Stanford or Ivies. One trick the counselor mentioned is to take lots of college courses at local community colleges like De Anza.

AP is not cutting it no more.

Stanford or Ivies. One trick the counselor mentioned is to take lots of college courses at local community colleges like De Anza.

AP is not cutting it no more.

Also, community services, extra-curricular activities, write-ups, interviews and reference from teachers. They only want people who are very eager to get in, demonstrate leadership qualities and highly independent.

I wonder if volunteering for your local Representative in congress will do wonders on kids’ resume? About community services, do people helicopter into some exotic places like Africa to “volunteer”?

I guess I may be too naive, but one thing which resonated with me during guidance night at school was “admission officers look quality over quantity when it comes to leadership/community_service”. The example was “if one student has title of president of some club and the other student took care of his/her 4 siblings at home every day, then they will value the latter more”.
I often wonder what is the meaning of those expensive volunteer trips abroad or holding a fundraising concert with Mom (who happened to be a popular singer in Korea and close friend of UN Secretary General). What those kids had was nothing but rich and powerful parents. (BTW, the daughter of popular singer went to Stanford.)
Well, I guess parents power still matters a lot, but it was reassuring to hear that some admission officers care about what true leadership is. As grown-ups, we all know that title doesn’t prove that the person has good leadership. In my opinion, person who cares about the title most is usually the worst leader.
However, volunteering for your local Representative in congress with his/her own interest and passion will definitely help.

BTW, the daughter of popular singer went to Stanford.

Can’t deny that.
She did summer internship at UN.

BTW, ivy schools are not as popular as many people think among SV kids.
The reason is because many ivy schools don’t have top engineering school.
Top3 UC schools are more popular than ivy schools in SV as far as I understood.

The reason is because many ivy schools don’t have top engineering school.

That’s pretty short sighted IMHO. Actually I’d love my kids to do some hard sciences like math and physics, or even philosophy, provided that they then do a masters at least in something that can support themselves like engineering and medicine. Engineering is not as intellectually stimulating as math or physics I think.