Can you report every week?

Even if yield got inversed, still can’t sell AAPL.

Even if yield got inversed, still can’t sell AAPL.

Why not? FB and AMZN have more upside than AAPL.

Can you report every week?

You can watch it daily here

NOTICE: See Developer Notice on February 2022 changes to XML data feeds.    Daily Treasury PAR Yield Curve Rates This par yield curve, which relates the par yield on a security to its time to maturity, is based on the closing market...

The theory is when short term (1 month or 3 month) yield exceeds long term (10 year or 30 year) yield, we are bound to face recession.

Economy is aggressive on short term gains (day trading) than long term (investing). This means everyone is getting quick money, but not really stable long term return.

For example, recently my friend was telling me that he invested 150k in stock and borrowing 150k margin to make quick return. He locked it with TREE made 100% returns in a year. He is aggressively looking for quick returns. Many follow here aggressive on quick returns.

For example, nowadays no one has a fear to overbid a home as they think home prices are going up forever. Similarly, equities were spiraling easily during such period, people borrow short term, buy stocks and sell soon with higher returns.

Yes, inverted yield shows the sentiment of investors/lenders/borrowers…etc going for short term gain. When this happens, prices are spiraling madly and bullish economy can not long last later.

iPhones are replaced within 1-3 years. There is a subscription program where you can get yearly update of iPhone + AppleCare… very reasonably price… many consumers subscribed… so guaranteed revenue for Apple. There is a company called Brightstar that buy second hand iOS devices in US and sell to emerging economies. So the number of iOS installed base is rising and very large… these guys buy apps

iPads are extremely useful, Macs are very good… replacement cycle is a bit long though… about 5-7 years because quality is too good.

Selling tons of them.

AirPods (wireless EarPods) are so white hot… mine arriving on Sep 22… still can meet demand after 1 year… demand would increase some more because of cellular Apple watch… AirPods are insanely great… use it once, you won’t do without.

At this point of time, only three stocks I dare to go all in: AAPL, FB and NVDA i.e. FAN

but since I’m all in AAPL, no point replacing AAPL with the other two for the same reasons as you.

Cellular Apple Watch + AirPods would help AAPL hit $1T pretty soon… their revenue should one day rival iPhone. Don’t buy AAPL today is already bad, sell??? Some people always think like traders and don’t seem to get what is meant by an investor.

I understand go all in with AAPL and FB. Don’t know about NVDA… too fast too furious.

Same reason, I can’t go all in with TSLA and NFLX either… too much too soon.

Provides a "nowcast" of the official GDP growth estimate prior to its first release.

The GDPNow model forecast for real GDP growth (seasonally adjusted annual rate) in the third quarter of 2017 is 2.2 percent on September 15, down from 3.0 percent on September 8. The forecasts of real consumer spending growth and real private fixed investment growth fell from 2.7 percent and 2.6 percent, respectively, to 2.0 percent and 1.4 percent, respectively, after this morning’s retail sales release from the U.S. Census Bureau and this morning’s report on industrial production and capacity utilization from the Federal Reserve Board of Governors.

As I said already, version 6 , 6 plus getting outdated and be recycled with 8 or x.

$999 do not care, iPhone X will fully booked on first day oct 27th ! In market, money is there to buy any quality item and Apple is known for quality.

All these are calculated and accounted by big brother like warrant buffet before putting billions on AAPL!

$999 do not care, iPhone X will fully booked on first day oct 27th ! In market money is there to buy any quality item and Apple is known for quality. 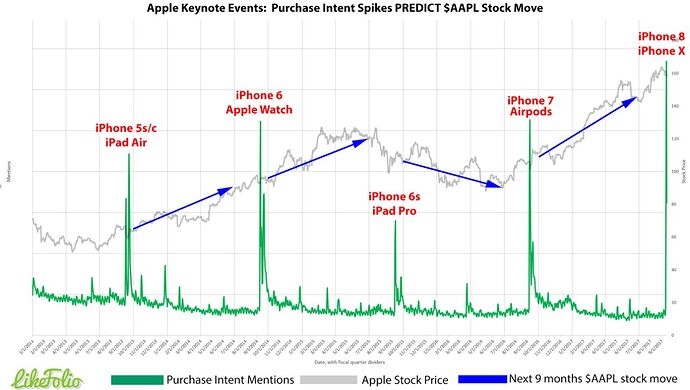 Would be nice if you could do a 1031 exchange for stock, right?

Would be nice if you could do a 1031 exchange for stock, right?

You can if it’s in a Roth IRA account. I’m sure most people here don’t qualify to contribute. I still have one from when I started working. IRA account lets you defer the taxes. Granted, both mean you can’t remove the money until you’re 59.5.