Census data shows that the annual increase in the number of high-income renter households has been consistently faster than wealthy owner households. 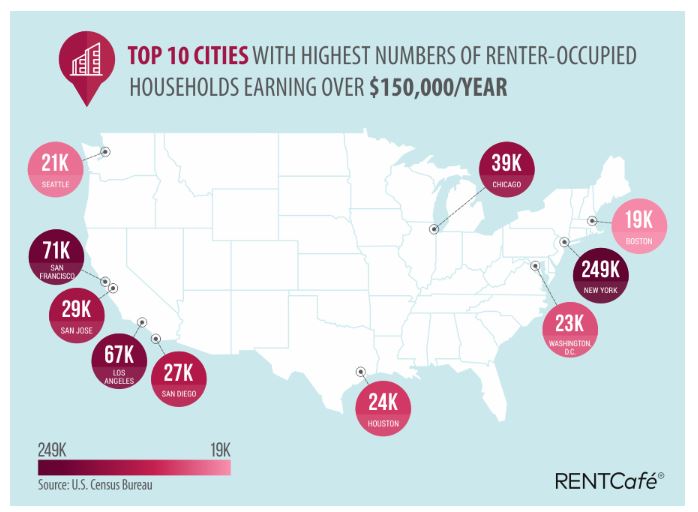 The largest share of high-income renters in the U.S. is reserved for San Francisco, where 31% of renter households earn over $150,000 annually . In fact, the only other renter demographic that holds a larger share is that of San Franciscans who make less than $50,000 per year (33.9%).

I feel like the data would be better presented in other ways.

Why? They can afford to pay high high rent but no money for a garage and car?

Why? They can afford to pay high high rent but no money for a garage and car?

You are on the money. My tenants live in condos in neighborhoods w absurdly high walk scores and have nice cars - Audis, BMWs, etc.

Both my tenants drive Teslas, I drive Toyota.

Condos and apartments have parking. A car is just for commuting. They walk everywhere for entertainment. If they can walk to work, public transit, or a work shuttle then there’s no need for a car. A car is a need if you live in suburbs where everything is spread out. It’s not a need in the city. Young people want to be in the city.

They might seem to have a better lifestyle based on the car they own but at least you don’t have to kowtow to a boss every single day. So in reality you are happier.

you don’t have to kowtow to a boss every single day.

In exchange I have to kowtow to her majesty after 9-5.

Tenants who love to waste money on fancy cars, rent, restaurants and travel, will never be able to save for a down payment. Great for landlords.

I bet he bought the mansion first

How about repeal rent control?

Are you smoking weed again?

Rent control wasn’t supposed to be for pied a terres for rich people.

Let’s repeal rent control at state level. Massachusetts has done it, they have Harvard and MIT, we have Stanford, Caltech. We can do it!

How about repeal rent control?

Are you smoking weed again?

No. She goes back to Hawaii to live there 50% of the time. She pays me full year rent though just in case you’re wondering.