See, The Cold Will Be Highly Desired

Was I not saying this a long, long time ago? Buy now in the Sunset, Pacifica and Daly City while you still can!!!

Coming off the heels of possibly the warmest day in San Francisco for the entire month of August, and actually seeing the sun at the coast (I think we broke 70 yesterday), it got me thinking about …

Cites that are not subjected to rising sea level, not on fault lines and would not be cooked are: Cupertino, MV, Sunnyvale, San Jose, Santa Clara and Campbell. Invest in these cities.

Foster City will be submerged in water, is that right?

North of 101 is susceptible to rising sea level.

I went to a fundraiser for a local Democrat running for the district 4 congressional seat…Running against McClintock. …In Tahoe…I knew I was in enemy territory. …But my business partner is a Democrat and I wanted to hear their case…There were party regulars and people running for City council, Congrees , school and utilities boards…And all they could talk about was climate change…Even the school bd candidate, nothing else mattered. …These environmental nutjobs were obessed and deeply delusional. …At 6200’ ocean levels mean nothing…Meanwhile local pressing issues weren’t not even discussed, like the extreme housing shortage. …The religon of do you believe in global warming has taken the Dems to new levels of craziness and makes one wonder if they are capable of governing anything. …

First there is little one can do about it locally. .Second China and India are the biggest players, Third handicapping local building codes to stop global warming is literally like pissing in the ocean…But being the only civil engineer and only one in the room who understood more than grade school math, I knew it was pointless talking to these lawyers, school teachers and other liberal arts grads…They have their religon and will go to their graves as happy enviro nut cases…

Beyond delusional… the Dem canidate will loose by a landslide. …https://ballotpedia.org/California's_4th_Congressional_District_election,_2016

It’s reasonable to be worried about climate change if your local economy is highly dependent on your regional climate. I mean, you own a ski resort with no snow you gotta have a backup plan right? Agree there is little you can directly do as a small municipality.

long ago prairie near water source is the centre of civilization
then sea ports rise because of international trade
what is next? ideal climate for humans living such as South Bay?

Climate change is real. More than 95% of scientists that study this stuff agree it’s real. But reasonable people disagree how best to deal with it. I agree over-obsessing it to the exclusion of other issues is very bad. That seems to be Brown’s only agenda right now. We do have many more pressing issues in the state.

Some top issues I think should be addressed before climate:

The list gets very long. Climate may not even be in top 10 at a state level, let alone city level.

I agree that climate change will not affect us in our lifetime. Maybe in our children’s or grandchildren’s. China and India maybe the top two, but we are a close third. It needs to be addressed, but current issues can’t be ignored. We need to address these issues simultaneously and Brown’s water plan of canals and tunnels just doesn’t do it. We need to stop wasting water on big agriculture.

Local politicians can do nothing about it. Obessing about and proposing silly plans that do nothing but pander and cost jobs, is poor leadership. .It is like declaring SF a nuclear free zone and all the other silly crap the Bd of Stupes does…

The issue will have to be addressed internationally…But Dems want to use it as a litmus test the way the religious right uses abortion to purge out moderates …Like you are 100% dedicated to stopping global warming at the epense of everyone. …which means the poor, the homeless and jobless are SOL…Rich people will be fine no matter what…But environmentalism is a cause celeb…everything else be damed…

If people are trully concerned about global warming they have to discuss population control…Not PC…and lets face it the GW crowd is all about political correctness. …and real weak on solutions that work. .

If people are truly concerned about climate change they should build more dense housing. The carbon footprint of densely built townhouses or even better condos vastly outperform that of SFH’s each on its own half acre lot.

The earth’s climate is ALWAYS changing. It always has been and always will. Only a tiny percent of scientist agree that it’s due to humans. When they say 95% agree, it’s that they agree it exists because it always exists.

Also, CO2 isn’t the enemy. It’s methane. Methane is a far more powerful green house gas. Cow farts are a bigger problem then giant SUVs on the road. However, you can’t rally people to regulate a cow’s butt the way you can attack the auto and oil industries.

Another major producer of methane is food waste. We throw out ~50% of food grown in this country. It all produces methane when it decomposes.

Climate change is something to get people fired up, then attack the wrong industries, then let people who don’t research the issue feel like they are doing something to improve it. That’s honestly what 99% of the government stuff is.

Speaking of global warming. …How soon we forget. .Remember when the news medai said we would have more extreme weather…More than 3 major hurricanes a year…More Katrinas…Well it was all BS.havent had even a minor one in 11 years…Now we have a minor one…Hermine…of course the media will hype thw crap out of it…http://abcnews.go.com/US/wireStory/hermine-hits-florida-coast-1st-hurricane-decade-41816713

Really interested to hear which reputable source claimed more than 3 major hurricanes a year and in what timeframe.

In 1975, they said temps were falling too fast, and we’d have trouble growing enough food to feed everyone. Now we know temps aren’t rising nearly as much as computer models predicted. It’s 1/4th as much. 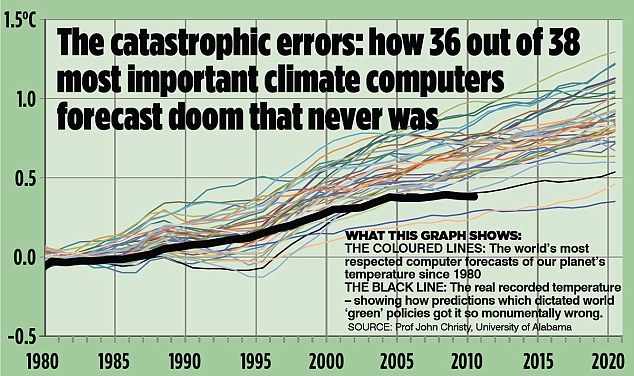 The Rising Cost of Natural Hazards

A warmer Atlantic Ocean could substantially boost the destructive power of a future superstorm like Hurricane Sandy, new research suggests. The researchers used a numerical model to simulate the weather patterns that created Sandy, with one key...

You can verify this by writing a simple script and count the 1’s and 0’s stretches.

So a higher probability of super storms, doesn’t mean:

a. We will have a superstorm every single year; and
b. That storm will land on America

We could have a 10-year stretch of no storm in America and still it doesn’t mean the model is wrong.

Frankly I don’t understand the hostility towards basic science. Both the left and right has their pet peeve about basic science. For the left it’s vaccine and for the right it’s climate change. What’s up with that?