Is the Bubble Out West about to Burst?

Home prices in San Jose posted negative growth last quarter. With the area leading price movement in California, is the bubble out West about to burst?

Home prices in San Jose, Calif.—one of the nation’s leading markets since the bust—posted negative 0.3 percent last quarter, marking the area’s first foray into the red in five years with currently the lowest quarterly growth rate in the country, according to Clear Capital’s recent Home Data Index (HDI) Market Report. With the San Jose area leading price movement in California, is the bubble out West about to burst?

“San Jose going negative over the last quarter is a huge deal, although no surprise given that growth in this market, and the Bay Area region as a whole, has greatly slowed over the last couple of years,” says Alex Villacorta, vice president of Research and Analytics at Clear Capital. “Rapid price growth combined with lagging, sticky income levels quickly pushed home prices out of the affordable range for a majority of homebuyers, which is a key factor in this market’s recent downturn in performance. For this metro, turn times have slowed for both performing and distressed properties as demand has begun to slack, finally pulling the area into the red during this real estate slow season.” 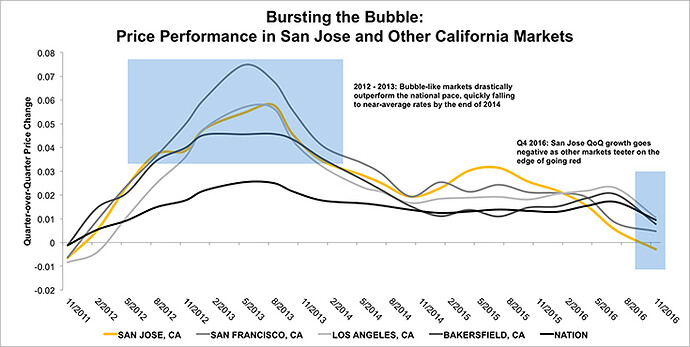 Many cities home prices have been stalled since 2015. San Jose City has appreciated 5.7% on SFH that is because the EAST SIDE has pulled up more as affordability is an issue.

@SamShuehRealtor did you see SJ prices going down in the last 6 months?

Saratoga, PA, Santa Clara sluggish, Homes not quite perfect are not selling or sell below asked for.
Good neighborhoods, and great floor plans matter.
East and South SJ are appreciating still.