About a dozen venture capitalists recently took a bus tour through the Midwest, and a funny thing happened: They caught the heartland bug.

In recent months, a growing number of tech leaders have been flirting with the idea of leaving Silicon Valley. Some cite the exorbitant cost of living in San Francisco and its suburbs, where even a million-dollar salary can feel middle class. Others complain about local criticism of the tech industry and a left-wing echo chamber that stifles opposing views. And yet others feel that better innovation is happening elsewhere.

“I’m a little over San Francisco,” said Patrick McKenna, the founder of High Ridge Venture Partners who was also on the bus tour. “It’s so expensive, it’s so congested, and frankly, you also see opportunities in other places.”

This isn’t a full-blown exodus yet. But in the last three months of 2017, San Francisco lost more residents to outward migration than any other city in the country, according to data from Redfin, the real estate website. A recent survey by Edelman, the public relations firm, found that 49 percent of Bay Area residents, and 58 percent of Bay Area millennials, were considering moving away. And a sharp increase in people moving out of the Bay Area has led to a shortage of moving vans. (According to local news reports, renting a U-Haul for a one-way trip from San Jose to Las Vegas now costs roughly $2,000, compared with just $100 for a truck going the other direction.)

When you invest in a San Francisco start-up, “you’re basically paying landlords, Twilio, and Amazon Web Services,” said Ms. Bannister of Founders Fund, referring to the companies that provide start-ups with messaging services and data hosting.

That means you should:

Trying to demonstrate that you can think out of the box?

What is a box?

renting a U-Haul for a one-way trip from San Jose to Las Vegas now costs roughly $2,000, compared with just $100 for a truck going the other direction.)

When you moved to SV, your company probably paid for relocation so you moved in style with moving company. But on your way out, well, you are on your own.

Makes perfect sense. Foreigners (skilled and/or wealthy) are moving into the Bay Area, displacing locals. This article is only telling one side of the story. It failed to take into account the other side. That’s why Bay Area population has record increases even though so many people are moving out/getting displaced.

It seems the mass media is against us. Always predicting our demise. Probably will dance on our graves too if we dropped dead one day.

The echo chamber is real and more people are starting to talk about it. Creativity isn’t going to thrive in an echo chamber.

The futuristic start up can be in any metropolitan. Look at the age of these VCs in the photo. Their means($) can be reduced than before. Too much money have pumped in redundant technology of similar ideas. Even give the track record of ipo the angel investors will gave up or get out of some non-profitable public companies. Is 10 year of negative profit on income statement enough to prove these companies will disappear in a recession?

The futuristic start up can be in any metropolitan.

Then why aren’t they?

Because almost all venture capital is in the Bay Area. They would not have had money to start elsewhere…

Because almost all venture capital is in the Bay Area. They would not have had money to start elsewhere…

Then the next question is of course why are the VC here? Why aren’t they in Ohio or Kansas?

Next question is of course why are the VC here?

I have seen many multi-millionaires, resigning their job once stock skyrockets, and going for start-up funding. Whoever made money with tech stocks, in their young age, turned themselves VC now.

Bay Area does have its advantages (costal, good climate, people magnate), but some other cities also possess the same (LA, for example). So I think it just boils down to a coincidence of first mover advantage. Because the first silicon chip maker chose Bay Area, just like the first filmaker chose LA, and the first financial institution chose New York. 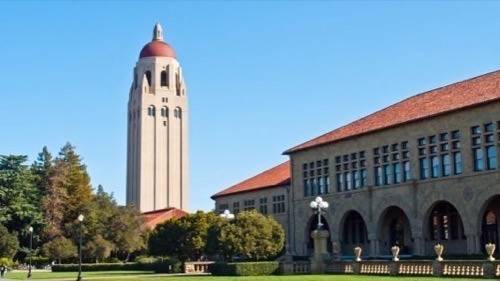 One University To Rule Them All: Stanford Tops Startup List - ReadWrite

Why Stanford alums dominate tech startup investment - even more than you might expect!

This is a list of companies founded by Stanford University alumni, including attendees who enrolled in degree-programs at Stanford but did not eventually graduate. This list is not exhaustive, as it only includes notable companies of which the founding and development history is well recorded by reliable sources. In particular, subsidiaries are listed with their owners in parentheses. Stanford University is one of the most successful universities in creating companies, attracting funding, and l... 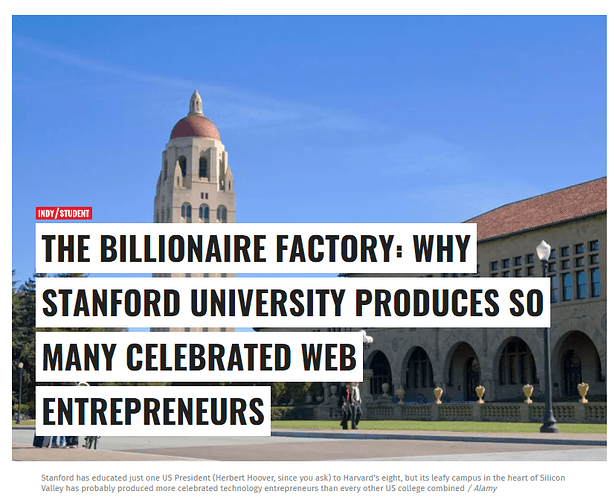 Most founders don’t just drop out of college to found a hot new startup. They most likely work at big tech companies like Google and Apple for a while. So after they have a family in the Bay and may even have a house, would they pack up and move to Arizona to start their new gig? Of course not. They will do their startup here.

And we have the whole ecosystem set up here. The money is here. The colleges are here. The talents are here. Once the flywheel is set in motion it’s very hard to stop, and very hard for other places to replicate. That’s the very definition of network effect.

SF is limited by its geography. The bay is in the way and locale is too hilly. Therefore limiting the number of people who can settle here. Also, LA is closer to Mexico so is easier for Mexicans to settle there.