Shares have tumbled from their March 3 high. 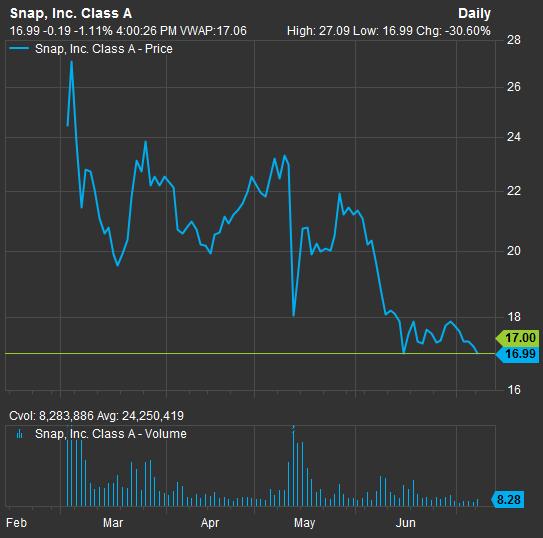 Or, does that mean our Fearless Leader has to sell his Sunset/Ocean/Richmond home???

Yes it did. But faceook was a winner even back then. Snap? Not so sure.

Well, FB is popular but can’t make money till it completed its mobile initiative.
Google is popular but don’t worth much till it introduces adwords.
So, we should monitor Snap for potential features and services that could make it a big winner.

Let’s not just pick only winners as our examples for possible analogies to SNAP. If there was a winner like FB so was there a non winner like Twtr.

I’ve had puts on SNAP for for a couple of weeks along with Cloudera. August expiration on both.

So, we should monitor Snap for potential features and services that could make it a big winner.

You can tell the company has very weak tech foundation. Compare that with Facebook, which can roll out pretty significant features on a weekend.

You can tell the company has very weak tech foundation. Compare that with Facebook, which can roll out pretty significant features on a weekend.

Can FB do that in their first year? How many years after IPO can they do that? I believe the initial tech foundation of FB is not that strong also. What is the contribution of lady Sandberg?

To me FB is a social media PLATFORM which includes messengers such as FB messenger & whatsapp, while SNAP is just another messenger whose features can always be copied or improved upon by any great tech company with a big enough customers base i.e. FB in this case.

Can FB do that in their first year? How many years after IPO can they do that?

First year of their founding? Most likely not. But I remember even before their IPO I was very impressed at the speed of their feature rollout. If you listened to Mark Z he also mentioned that. They focused on laying out a solid tech foundation on which engineers can develop and test features on their own. At any time there maybe dozens of different versions of Facebook being tested in the wild. Facebook used to have the slogan “Move fast and break things”.

Listen to Episodes 4 and 5 of “Master of Scale”. Reid Hoffman talked with Zuckerberg and Sandberg.

Masters of Scale is an original podcast in which LinkedIn co-founder and Greylock partner Reid Hoffman sets out to describe and prove theories that explain how legendary leaders take their companies from zero to a gazillion in ingenious fashion.

Facebook tanked post-IPO, because people were concerned about the lack of mobile strategy and ad revenue. It was only 12-18 months later that a majority of their revenue was from mobile. They executed the hell out of it.

bottom fishing is a dangerous game!!! But no pain no gain!!!

Facebook’s execution has been top notch. I think Facebook is the modern day Microsoft. They execute well, and they are not afraid to copy. Snap is like Apple of the 80s. It had some good ideas, but execution was bad, and tech foundation weak. Do you remember the old Mac OS didn’t even have proper multitasking? One process behaving badly was enough to crash the whole machine. That was why Apple was desperate to buy a modern OS and ultimately bought NeXT.

Facebook’s mobile app used to be built on Html5. They realized it sucked, scraped the whole thing and built native from the ground up in 8 months or something. Reminds me of how Bill Gates realized Netscape was a threat and brought Microsoft’s best engineers to build IE in record time. Same level of execution.

This analysis doesn’t mince words.It’s down over 7% today.

I like Scott. He also thinks Amazon will get to 1T market cap within 3 years.

What WS thinks of AMZN today is like what they think about MSFT and DELL in 1990s.

Mark has a personal beef against Evan after his takeover offer got rebuffed by Evan rudely.

Mark has a personal beef against Evan after his takeover offer got rebuffed by Evan rudely.

He didn’t do it nicely?