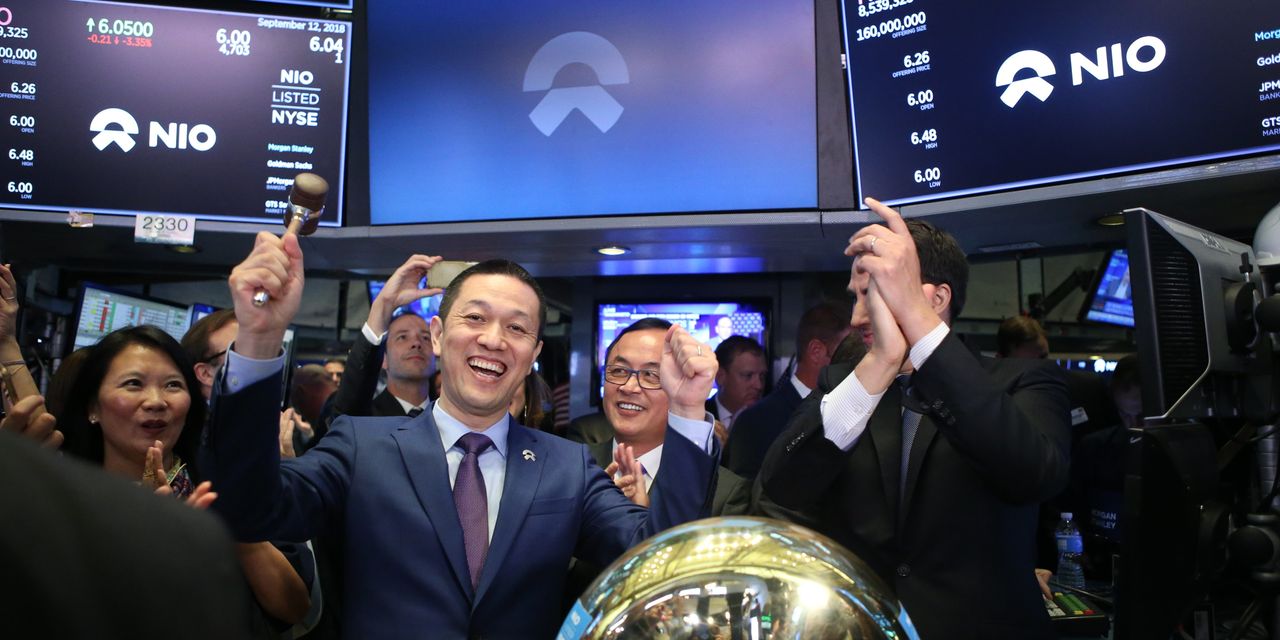 TikTok and Discord Are the New Wall Street Trading Desks

As trading by individual investors boomed during the coronavirus pandemic, so has the popularity of online communities where they gather.

Archive link if you are paywalled out: https://archive.is/ZyawW

A new army of social media-enabled day traders is helping push stocks to records and turning companies into market sensations.

As trading by individual investors boomed during the coronavirus pandemic, so has the popularity of online communities where they gather. Platforms including TikTok, Twitter, YouTube, Reddit, Instagram, Facebook and messaging platform Discord have become the new Wall Street trading desks. Individual investors gather to talk about hot stocks like Tesla Inc., TSLA 0.70% boast of gains and commiserate about losses.

Shares of Chinese electric-vehicle maker NIO Inc. are an example. The stock has received some of the most enduring interest from individual investors, joining the ranks of dozens of others, including fuel-cell company Plug Power Inc. and Tesla.

Though hardly a household name, NIO is among the most searched stocks on Google. Video snippets under the tag #nio have accumulated more than 35 million views on the social-media platform TikTok, with many young investors encouraging others to buy shares of the company or questioning if it is the next Tesla. And the buzz is alive on Twitter, where it was mentioned nearly 6,800 times on a single day in November, up from about 100 mentions a day at the start of 2020. 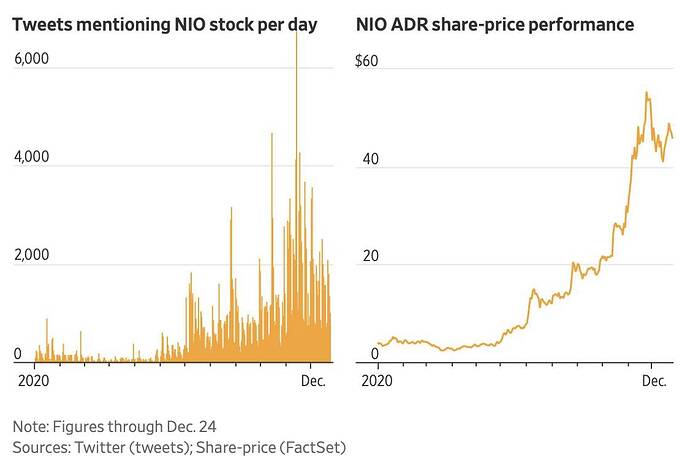 The online buzz has enticed traders to pile in. Gavin Mayo, a 19-year-old student at the University of North Carolina at Chapel Hill, says he typically spends anywhere from one to five hours a day scrolling TikTok, YouTube and other platforms for ideas on what to trade while churning out video snippets to more than 60,000 of his TikTok followers.

“If there’s some really good stocks out there—usually people are talking about it,” said Mr. Mayo, adding that he recently sold 100 shares of NIO for about a $1,600 profit after they rallied more quickly than he expected. Now, he’s staying away from shares of electric-vehicle makers because he thinks they have run up too far. He recently sold his position in Tesla, too. That stock has surged 748% in the past 12 months, a rally that has intensified over the past week, making the company worth more than Facebook Inc.

Some new investors are drawn by the camaraderie that the platforms offer. Georgina Allen, who is 26, waded into stock and options trading after two of her friends convinced her to join a Discord server dedicated to trading. While she was furloughed from her job during the pandemic, the federal government worker turned her attention to markets.

She often followed a routine: She would wake up at 6 a.m., assess premarket stock moves and look over her option positions. When markets opened, she would jump on a Zoom call with other members of her Discord group.

“We actually would join like a Zoom call, and we would live-trade together. And that was pretty much my life,” said Ms. Allen, who is now back at work.

The hot new way to take companies public hurts most investors, and its track record is now clear.

Archive link if you are paywalled out: https://archive.is/uH2E3

Most investment in SPAC IPOs comes from hedge funds known in the market as the “SPAC Mafia.” The sponsor’s pitch to these funds is simple: Invest in “units” containing one share and one or two additional securities—a “right” and/or a warrant. The price is $10 per unit, but if you don’t want to participate in the merger, you can redeem your shares for $10 plus interest and keep the warrants and rights for free.

This is a tremendous deal for IPO investors who redeem their shares. A right gives a unit holder an additional one-tenth of a SPAC share when the merger is complete. A typical warrant gives the holder an option to buy between one-half and one share at an exercise price of $11.50 any time over five years following the SPAC’s merger.

We studied SPACs that completed mergers between January 2019 and June 2020 and found that, on average, they lost 12% of their value within six months following the merger, while the Nasdaq rose roughly 30%. Even with these drops in share price, the 20% that the sponsor gets essentially for free provides a nice return on its investment. The sponsors of these SPACs enjoyed a return on investment of more than 500% as of the end of 2020.

The sponsors of these SPACs enjoyed a return on investment of more than 500% as of the end of 2020.

“We actually would join like a Zoom call, and we would live-trade together.

Is this way ZM is so popular? So much for Beth’s product fit.

The Battle of GameStop

How Reddit Is Taking on Wall Street – and Winning

Reading Wall Street Bets feels like the discussion at a middle school cafeteria table circa 2000. Redditors on Wall Street Bets (who refer to themselves affectionately as “autists” or “retards”) [4] encourage one another to have “diamond hands” (

), the will to stay strong and not sell a stock when things are going poorly. Contrast this with the “paper hands” (

) of those who are weak-willed and sell a stock based on market sentiment. Companies are headed “to the moon” (

). Bears are not mentioned without the adjective “gay” (

I am rooting for the r/WSB peeps. It’s like David vs Goliath. Root for the underdog. These hedge fund scumbags deserves it.

Why did this guy go so short? He really thinks he’s the smartest on the block? Had his head cut right off.

Other shorts Melvin disclosed were the talk of Wall Street on Monday, including National Beverage, iRobot, and Bed Bath and Beyond. All were soaring Monday morning — when the overall market was down.

Is time for somebody to punish professional shorts like Andrew and Melvin. Have I know, I will join WSB. Make money at the same time. Is personal2, I got shaken out of SHOP.

“D.C.’s policy bubble is fueling Wall St’s asset price bubble,” strategists led by Michael Hartnett wrote in a note on Friday. “When those who want to stay rich start acting like those who want to get rich, it suggests a late-stage speculative blow-off.”

The strategists predict a market correction and for positioning to peak in the first quarter, with the BofA Bull & Bear Indicator closing in on a “sell signal.”

Markets Look Like They’re in a Bubble. What Do Investors Do Now?

Investors see some classic signs of froth, but they are uncertain whether a downfall looms.

Archive link if you are paywalled out: https://archive.is/AjLlh

An even bigger issue arguing against a marketwide bubble is simple math. With interest rates at rock bottom and further stimulus on the table, many investors are being handsomely rewarded by putting their money into riskier, higher-yielding assets. What’s more, in many cases earnings have held up or been robust, despite a global pandemic.

That combination of factors has helped push investor optimism. Bullishness on stocks among money managers is at a three-year high, according to a recent Bank of America survey of 194 money managers who oversee $561 billion in assets. Meanwhile, the average share of cash in portfolios—typically a safeguard against market turmoil—is at the lowest level since May 2013. 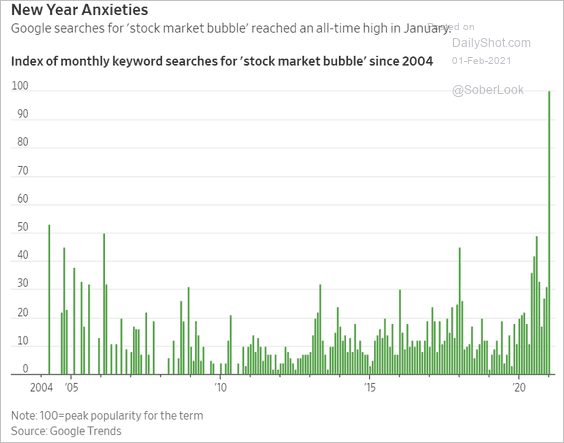 The fact so many are searching the term means we weren’t even close. Bubbles have euphoria not pessimism. 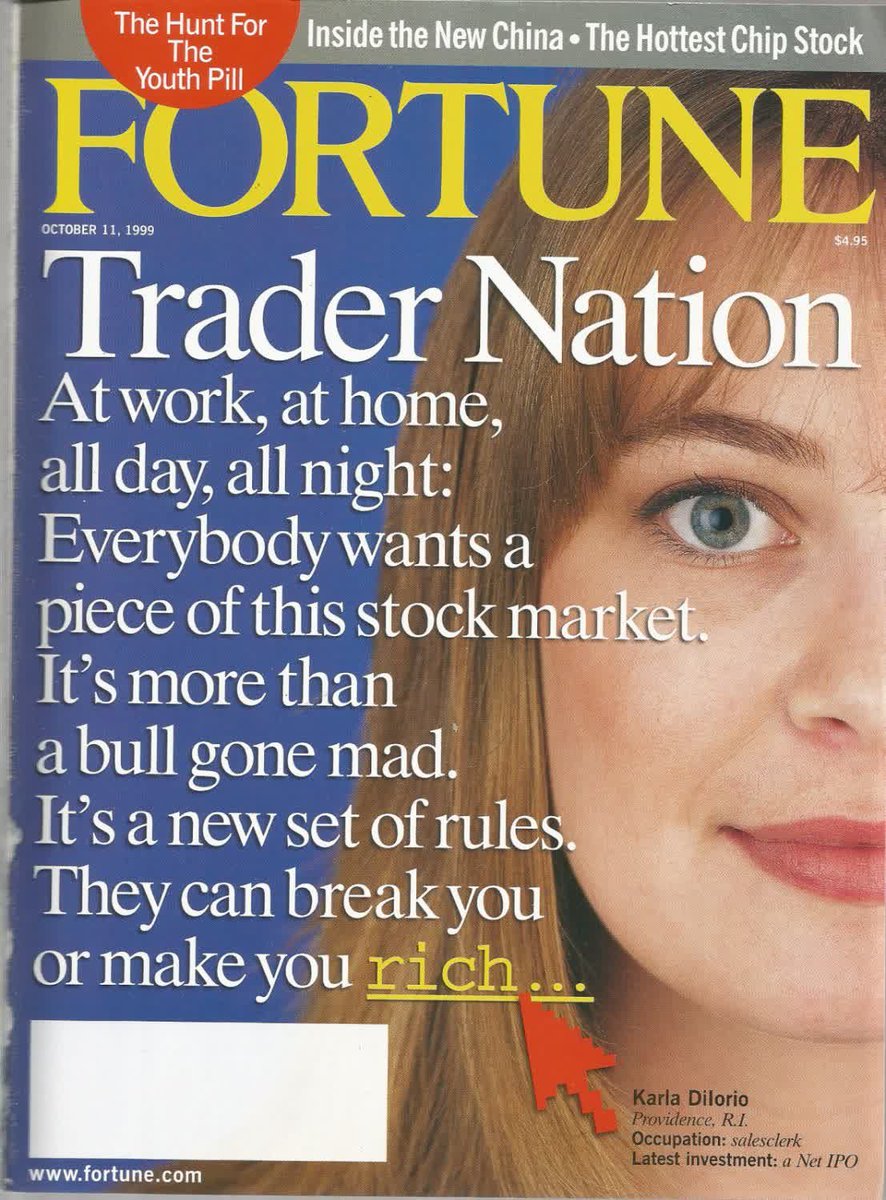 Meet The New Market Makers They’re young, they’re rich, and they couldn’t care less about Graham & Dodd. But they’re the ones driving those insane tech stocks, and they’re not going away.

There are about 20 minutes to go before the stock market closes, and I’m standing next to 24-year-old Adam Mesh in the sprawling offices of Tradescape, a Manhattan day-trading firm. “Hey, check out PLUG,” Mesh yells out. Overhead, on one of Tradescape’s ubiquitous TV monitors, CNBC’s Joe Kernen is talking up Plug Power, a fuel-cell company that Mesh and the other twentysomething traders here have never heard of before today.

On his multicolored computer screen, Mesh is watching PLUG, already up $15 to $53, suddenly begin to surge again. He jumps in, buying 500 shares at $55. About a minute later he gets out at $58. But PLUG is still soaring, so Mesh gets back in, this time at $60. I look around at the other traders squeezed shoulder to shoulder in Tradescape’s offices, and on every screen the ticker PLUG is flashing, its shares furiously moving higher.

“What the heck is this company?” I ask. “It’s PLUG,” Mesh says. Yeah, I know that much. But what does it do? “I don’t know,” Mesh responds, without looking up. “Power, I guess.” I decide to let the issue drop, and with PLUG now about to close at $79, the question of what the company does seems pretty irrelevant. In a rapid bout of buying and selling, Mesh trades nearly 10,000 shares of PLUG in the few minutes I stand behind his desk, making $20,000 in the process. It’s been a good day for Mesh, but for some traders it’s been even better. “I made a honey,” one guy calls out, using trader slang for $100,000. “Can you believe this?”

And the funny thing is, PLUG is back! We have come full circle! 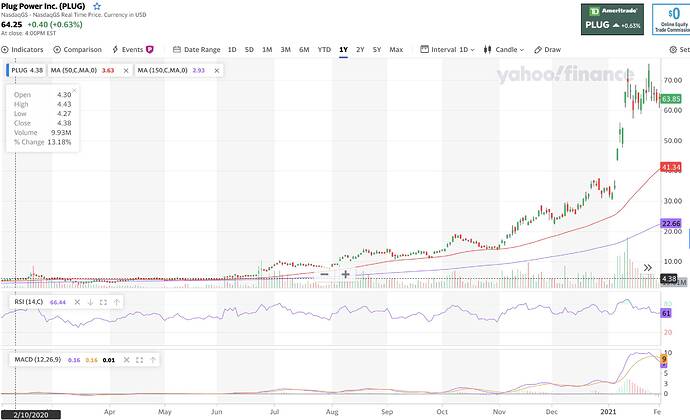