SV Only 3rd Most Educated Region In America - Guess Who's #1

Did you guess right? 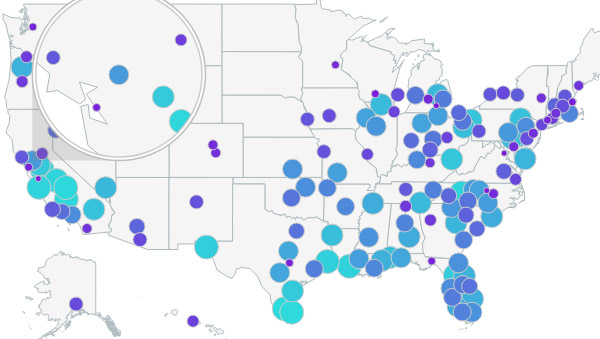 WalletHub compared the 150 largest U.S. metropolitan areas to determine the most and least educated regions in the country.

These people say Seattle is #1. Which community boasts the highest concentration of brainpower — and therefore can claim to be America's smartest big city?

Ok, further down in your article it does say Ann Arbor is tops for smaller communities…

Seattle wins again. We’re actually building housing for workers (at more than 2x the rate of CA over the last 10 years).

That’s just because Washington doesn’t have prop 13. After the rapid rise in property value I think Seattle will soon discover the joy of capping property taxes.

We just need to turn Seattle into San Francisco and Bay area’s monopoly on tech will be secure.

So what exactly does Seattle get if it wins…The traffic is already horrendous and prices are sky high…What price progress?

Now that you mention it, go away. There’s nothing to see in Seattle.

Funny how fast everyone becomes a nimby…lol

Very small town. I don’t care if everyone in that town graduated with a PhD. That number is still going to be insignificant.

I bet all the educated people there have liberal arts degrees in politics only. Not a competition to Bay Area for sure.

No match to the Bay Area because if not for Msft and Amzn this place doesn’t really have a tech presence.

Seattle has a lot of biotech. That’s going to boom with how old and unhealthy the American population is getting.

Biotech is not Hi-tech though. So if that were the case then BA and Seattle are not in direct competition with one another.

Hey, we have a fairly big biotech presence here in the Bay!!!

Like what? If Genentech was really that successful why isn’t South San Francisco the heart of BA tech industry instead of Silicon Valley?

No disagreement that HIGH tech in SV is King, but the idea that we are void of any biotech presence is incorrect. That’s all. We have some biotech in the East Bay too and even our Mission Bay…

Yes, a year old but still…

I have a double degree from UCB in biochemistry and chemistry. And I worked for 3 years in the biotech industry before switching over to high tech. I think I know a thing or 2 about biotech… is that compared to high tech this industry is a dinosaur. Good luck with that early retirement and ticket into the 1% should you decide to work (or invest) in this field…

Most Education does not mean smartest. I know a LOT of higher educated dumb ass especially in america.

That is true, but I guess higher educated dumb asses are still better than dumb asses with no education at all…

Impressive! Yet you haven’t been able to ascertain our Fearlless Leader’s home neighborhood yet…