What Bay Area Will Look Like After Sea Levels Rise 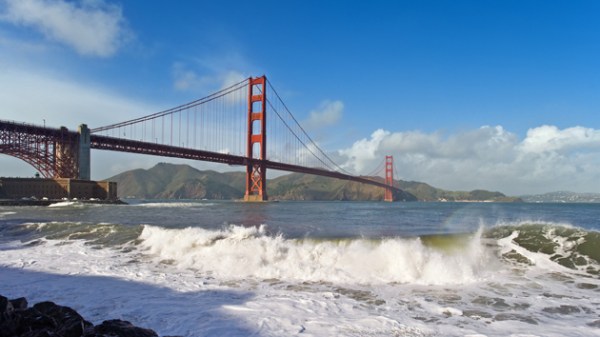 Sea level rise threatens billions of dollars of property in the San Francisco...

And not much is being done about it.

To make its maps, the Public Press partnered with the University of California-Berkeley Cartography and Geographic Information System Education Lab and used flooding and sea level projections from the US Geological Survey and the San Francisco Public Utilities Commission. The San Francisco Public Utilities Commission predicts that in the next hundred years, water levels in the Bay could rise as much as 8 feet over high tide at current levels, including storm surge: 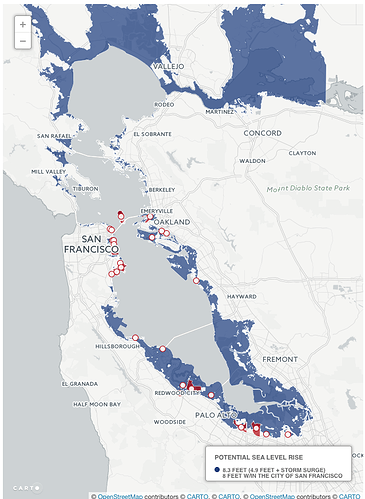 Yikes! Hunters Point in SF and West Oakland will be underwater! Anything east of 101 from Burlingame down to San Jose is no good. Almost all of Milpitas will be gone. Not pretty.

Sound like you are spreading fear. First you say very hot trend, now sea level rise, how about fault lines and meteors

A bit of fear is healthy. If people are too scared to buy I won’t mind getting some hot deals.

Unfortunately your fear mongering is causing me pain. Los Altos, Cupertino, Campbell, and any houses between 101 and 85 would be sought after. These are my target area.

Real estate buyers dont believe it, otherwise you could buy in those areas for pennys on the dollar. .Hundred year projections mean nothing, humans think in 30 years time frames max…I look back 30 yers and see nothing different from now, for sea levels in the Bay area…Therefore I believe this wil not be an issue in the next 30, during which time I will probably be dead…Besides 100 years is plenty of time to build a 8 ft wall…Let Trump build it…His wall is over 40’ and 10 times longer…Sea levels have supposely to risen 1 or 2 “.in the last 100 years…now they are saying 8’ in 100 years?
That is 1” per year, 100 times faster than before…total bull shit…
Self serving crap dished out by anti American, anti business, self loathing liberal wingnut enviro nazis
Measurements 100 years old are unreliable. …how càn these projections be reliable?

This whole sea leavel rise issue is a civil engineering problem…What datum points do they use and is the land stable?..A lot of the supposed increase in sea level is attributed to Antartican ice measurements. …unreliable and mainly guesses. .70% all freshwater is in the Antarctic…is it melting or increasing in thickness?. .Lots of coastal land subsides. …hard to measure…But man can deal with it, like we have for centuries. …Right in here in Cali the delta has supposely dropped 30 feet…we just keep building the levies higher…Can be done around the BA…
What reliable datum points were used to say sea levels are rising?

Around the bay, fill areas naturally sink due to their added weight…So even with sinking landfill and sea rising , how come we havent had massive flooding already?
From Wikipedia
ports, urban conglomerations, and agricultural regions are built on river deltas, where subsidence contributes to a substantial increase in effective sea level rise. This is caused by both unsustainable extraction of groundwater (in some place also by extraction of oil and gas), and by levees and other flood management practices that prevent accumulation of sediments to compensate for the natural settling of deltaic soils.[75] In many deltas this results in subsidence ranging from several millimeters per year up to possibly 25 centimeters per year in parts of the Ciliwung delta (Jakarta).[76] Total anthropogenic-caused subsidence in the Rhine-Meuse-Scheldt delta (Netherlands) is estimated at 3 to 4 meters, over nine meters in the Sacramento-San Joaquin River Delta, and over ten feet in urban areas of the Mississippi River Delta (New Orleans).[77]

The point is we already dealt with a 9 meter land subsidence in the delta and and a few feet of land fill settlement. …So 8’ of supposed sea level rise is not as big a deal as the alarmists say…

If you believe in global warming…buy at higher elevations. …I usally do anyway…I prefer the hills to the flats…Better views, better neighborhoods and better soil…no flooding and closer to bedrock, more stable in a quake

I don’t know how I will factor climate change into my investment. Just started paying attention. Even if someone disagrees with the cause we still have to deal with the effect. Technology will save our ass so we won’t have the water world scenario. But towns like Norfolk VA are already dealing with the major annoyance of frequent flooding. I wouldn’t want to buy any properties in Norfolk for sure.

Back in Bay Area I will pay more attention to areas close to marsh land, like Aviso and anything north of 237. BTW do we call that area the groin or the armpit of the bay? Santa Clara county already revised the flood map so some properties have to start buying flood insurance.

We can deal with it. Places like Miami cannot, since the ground is porous and Levvies will not help. If area is desirable enough it may become a new Venice – just make buildings on top of 4 story parking garage and expect bottom levels to flood over time

Miami is beyond repair. For the Bay Area we can dam it up. But costs will be very high and who will foot the bill? If it’s up to individual cities I don’t think towns like East Palo Alto has the resources.

Just for comparison, the projected cost for the new 101/880 interchange at Valley Fair Mall is $1B. That teeny tiny piece of highway costs a cool 1B. If we were to dam up the entire coast line of the SF Bay we can easily reach 100s of B’s.

We have the technology to deal with it here. We also have the money. But will rich people up in the hills want to spend to help the poor on the coast? I am not so sure. Look at the housing affordability fight going on now.

costs will be very high and who will foot the bill?

costs will be very high and who will foot the bill?

Their HQs are near flood zones. Lawsuits or goodbye to Facebookers and Googlers which would mean eventual goodbye to shareholders.

I predict no flooding in BA, beyond what we have seen in the last 100 years, at least in my lifetime…But I am investing heavily at 6200’…For all the alarmists, put your money where your mouth is…

Venice has dealt with sinking land for millenia…The news media and liberal self haters want us to destroy our economy because of sea levels that may rise a bit…But these same people are buying in areas that will be most affected…If you are a believer, move to Denver…

Nobody is concerned about Kim Jong Un sending a nuke our way at some point in the future?

Maybe he’ll aim at Tahoe and let the water come downhill to flood us all.

Definitely a bigger concern than global warming…BTW, Tahoe drains into Nevada not Cali…which means a nuke would flood Reno not the BA

But will rich people up in the hills want to spend to help the poor on the coast? I am not so sure.

But will rich people up in the hills want to spend to help the poor on the coast? I am not so sure."

Of course not. This is perfect solution to the homeless problem because we can blame it on an act of God. Let them stay on the coast. Bye, bye.

Here is a higher probability disaster by a wide margin.

We Visit The Doomed Homes On The San Andreas Fault

Some very big quakes shook Indonesia yet again, the mega-quakes of this last decade have been astonishing and the ‘aftershocks’ are still quite strong.  Meanwhile, in North America, the…

The piece Tom linked to is awfully hysterical, with a solicitation for money at the end. .I wonder how much she collected and where the money went…The Hayward fault goes right through the Cal bears stadium. …Proximity to the quake is not as critical as the type of underlying soil …But now you can choose how far you want to be from the San Andreas. .I am 150 miles away…So far the earthquake insurance is only $100/year…We are much more likely to get a tsunami from a rock slide…There was one in 1952 in Emerald Bay…We had a drunk run into my apartment building…the tenants said it felt like a quake…