For the last five years, Redwood City-based startup Impossible Foods has been developing an entirely plant-based burger meant to mimic the taste, smell and even sizzle of the real deal, and eventually disrupt the $70 billion beef industry worldwide. Since its inception, the company has raised $183 million in funding, becoming one of the best-funded food companies of the decade, and has come surprisingly close to fulfilling its mission of creating a burger replica good enough to fool meat-lovers everywhere.

It’s even caught the attention of tech giants: Google unsuccessfully tried to buy the company for $200 million to $300 million last year, according to The Information, although a deal reportedly wasn’t reached because Impossible wanted a higher price.

Could this be the real deal? There are many food startups in the Bay Area these days, most famous of all must be Soylent. Are we on the cusp of “eating” the food industry?

Huge implication if true. Locally we will suck dry Middle America’s agriculture income, and transfer the money into the Bay Area economy. That’s yet another stream of revenue.

Like a vampire we already sucked dry the mobile industry, and about to do the same to cars. Why not food?

No no to burger. Prefer to coleslaw and salad.

Sorry the anti meat movement will make me vote for Trump…Most cattle graze on land that would remain fallow, you cant grow anything on it…It is the most efficient way to produce protein from marginal land. The least healthy thing about the burger is the bun…Vegi burgers are disgusting.

They did say it tastes just like meat… So I’ll withhold my judgement for now. I am really excited by this sudden burst of activity in food tech. Even though it has nothing to do with computers the Bay Area is again the #1 breeding ground.

Our “Can Do” attitude knows no bound.

This is a very complicated issue. Large scale agriculture is not good for the environment either.

I will let the Vegans graze on my lawn…they probably taste better than carnivores. …lol

Tofu flavored whopper - coming to a Burger King near you:

Burger King is introducing a Whopper made with a vegetarian patty from the start-up Impossible Foods. The deal is a big step toward the mainstream for start-ups trying to mimic and replace meat.

Where would they grow all the plants to make the food? They definitely aren’t growing it in Redwood City. Farming has far bigger issues: 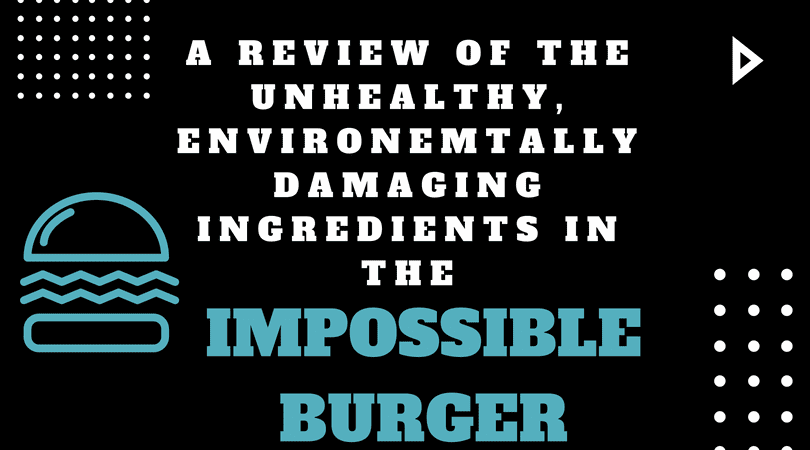 The Impossible Burger: Unhealthy and Bad For the Environment? - Ancestral...

The Impossible Burger: Unhealthy & Bad For the Environment - how the ingredients in the impossible burger have been linked to health and environment issues

One of the big trends I’m interested in is the rise of vegan meat substitutes and the inevitable political battle that’s coming over meat consumption. Due to cultural shifts and concern about climate change, there’s almost certainly going to be more pressure on individuals and countries to eat less meat. On that note, yesterday we got the S-1 filing from Beyond Meat, the maker of vegan burgers among other substitutes. The company is backed by Bill Gates, among others, and if successful, it could be valued at about $1.2 billion. One the most interesting data points in the filing is that the company says at Kroger grocery stores, 93 percent of Beyond Burger buyers over a 26-week period also bought animal protein of some sort. The gist is that while, in the past, “veggie burgers” seemed aimed at vegetarians or vegans, this new generation of meat alternatives is also targeting meat eaters who want to reduce their consumption. For 2018, Beyond Meat’s revenue was just under $90 million, but if they can convince more meat eaters to shift just a little of their overall consumption to these products, it’s easy to see sales for this company (and its competitors) being massive.

What vegans don’t realize is the cattle turn lands that are infertile for crops into protein.
The vast majority of western graving land is unsuited for crops.

Investors love Beyond Meat. Ahead of its earnings report next week, its shares hit another record high.

Grass-fed Beef — The Most Vegan Item In The Supermarket

Probably the most vegan item you can buy in the supermarket is a pound of grass-fed beef.

Impossible Foods is expanding from faux beef to faux pork. Impossible Pork is their newest product made entirely from plants that

Impossible is based right here in Redwood City. Not only do we make cars here, we also do cutting edge “agriculture” right here in Silicon Valley.

So they only sell it in Redwood City? This is starting to sound like the sports fan that says “we”.

Don’t like impossible foods? No problem. Beyond meat is another Californian company making plant based faux meat.

I think faux meat will be a great investment thesis going forward because of climate change.

Do you need to live there to invest in them? Are you working for one of them? Then what advantage do you gain from them being local? It’s like fans bragging about “their” team winning a championship when they aren’t on the team.

Do you need to live there to invest in them? Are you working for one of them? Then what advantage do you gain from them being local? It’s like fans bragging about “their” team winning a championship when they aren’t on the team.

Part of a self-reinforcing cycle that drives continued growth in the area. Best and brightest come here for opportunity, some are successful, deploy their wealth in the area, and start companies of their own to perpetuate the cycle.

You say that like everyone who lives there will work for a FAANG company, unicorn, or raise VC money. What I find weird is people who never have and never will do those things being such fans like they are the ones doing them.

Heme and all the other ingredients that make the plant-based burger sizzle.

Unlike the heme found in beef, the heme in the Impossible Burger is made by taking the DNA from the roots of soy plants, inserting it into genetically engineered yeast and then fermenting that yeast (much the way Belgian beer is made). Soy contains estrogen-like compounds called isoflavones that some findings say can promote the growth of some cancer cells, impair female fertility and mess with men’s hormones.