Will Seattle really become the next San Francisco?

Talk to just about anyone about local real-estate prices and there’s a good chance you’ll hear this: Seattle is becoming the next San Francisco.

Sure, housing prices and rents are skyrocketing here, but are we really doomed to a fate where million-dollar homes and $5,000-a-month rents will soon be the norm?

Don’t count on it. Seattle is nowhere near catching up to San Francisco’s brutal housing market, the data and interviews with experts show. And Seattle is unlikely to get there anytime soon — if that’s any consolation. 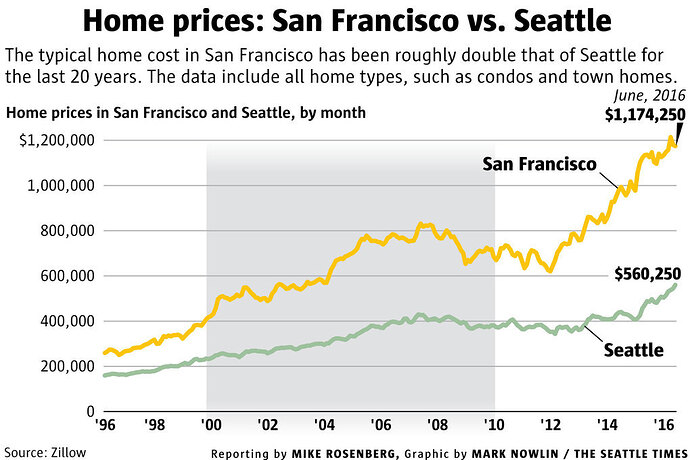 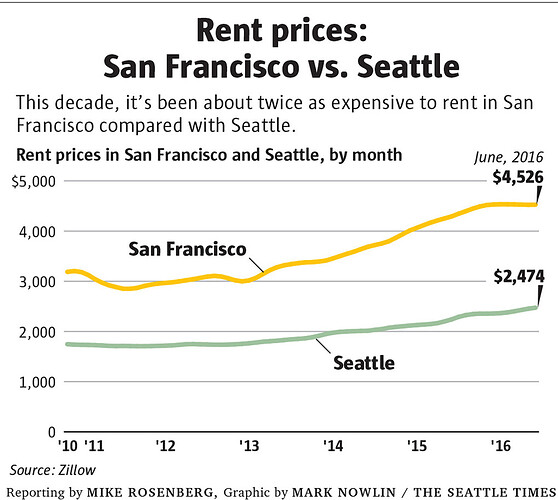 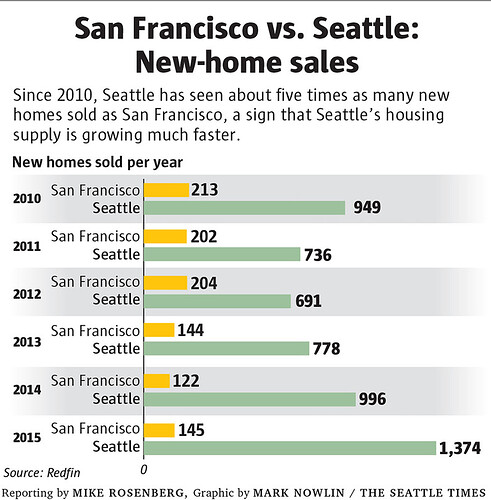 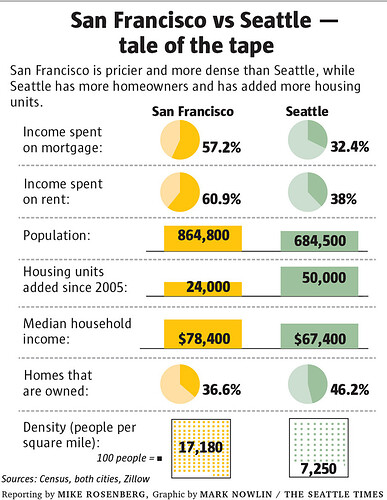 So Seattle’s home price is half of SF’s, but rent is also half. So cap rate is about the same?

But Seattle has a lower price point, and its housing market looks less skewed than SF.

Hmm… maybe I really should make a side bet on Seattle.

San Francisco itself doesn’t have attractive cap rate, but appreciation is what building the wealth. Based on 2012 -> 2016 graph, Seattle doesn’t have what it took as SF. But given west coast multi-culture and tech influence, it definitely gonna retain the growth trend, but not sure how much it can be closer to SF.

appreciation is what building the wealth

Is appreciation still a dirty word at the bigger pocket forum? Haven’t gone there in ages.

Lolz, yea, it still is. But I can hear from the host, Brandon, changing tune to appreciation (which give more leverage for future) from just focusing on cash flow.

Yeah. I still listen to their podcast from time to time, and Brandon is tiptoeing around the topic of appreciation. His boss Josh is still dead set against it though.

Josh doesn’t strike me as a particularly open minded person. He’s also dead set against condos, or any sort of HOA’s really. I always wonder how successful his rental investment is.

Too much rain…will never be better than SF…don’t overthink it.

For Bezos, the rain just reminds him of how much money Amazon is raining down for him so he should like it there…average joes/janes not so much

Weather is an over-played factor. No doubt we have the most gorgeous weather here. But more people live outside of here than inside. How do you explain the millions of people living in NYC or DC? Weather there suck. I’d trade light rain for humid heat. How about furnaces like Phoenix? We just read an article about a guitar shop couple moving back to Phoenix from here.

Once you live there in a while you get used to its weather. I lived in Minnesota for many winters. Lovely time there.

Weather is an over-played factor.

But that would be a fundamental reason why we (SF or Bay Area) would never lose to Seattle (unlike those football games)… it would be a deciding factor to anyone weighing both places with everything else being the same.

But that would be a fundamental reason why we (SF or Bay Area) would never lose to Seattle (unlike those football games)… it would be a deciding factor to anyone weighing both places with everything else being the same.

I disagree. Jobs, schools, housing are the 3 main factors. Weather may not even be in top 10.

Silicon Valley got its start because of the defense spending in companies around Stanford. Weather has very little to do with anything.

Most big cities and financial centers have crappy weather: NYC, Hong Kong, Singapore, London, Shanghai, the list goes on and on. Pretty much anywhere other than Californian coast have bad weather.

I agree weather is pretty far down the list for most people. How much time to people really spend outside? We are at work 8+ hours a day at sleeping for 6-8 hours a day. When you’re talking 2x more expensive, for a lot of people paying 2x more for better weather isn’t an option.

I don’t know, I think the fabulous weather here plays a bigger role in the decision making than you guys may think. I always go with the general notion that people are not dumb so if something is so much better then everyone would want it because it is so absolute and clearly better. If they don’t want it, then something is wrong or simply it is not all it is cracked up to be. That fits Seattle. The weather makes Seattle a bridesmaid and not the bride to SF every time. Keep in mind that we are talking relativities and not absolutes here. And the question was simply would Seattle take SF ever, nothing more nothing less. No one ever questioned that Seattle has jobs, schools and housing. SF will pretty much always have the jobs to match Seattle. Schools (I don’t know) and housing (never) but yet here we are with hordes of people wanting to be here.

To me weather is number one…bad weather is an incurabe defect…can fix everything but the weather. …hate rain and fog…love sunshine and snow in the winter…very few places on earth where you can ski and surf the same day…Or course if you work like a dog all day like Gates or Bezos who cares about the weather…they can private jet anywhere to find good weather…I go to Mexico a lot…Full of people from Washington and Canada. …refugees from bad weather…The other problem wirh Seattle is traffic…horrible…of course its bad in THE BA too…

Obviously, both cities are desirable cities for one reason or another but the question for me (at least) was whether in theory could Seattle ever overtake SF and the answer was a resounding NO. And the reason cited was the weather as the tipping factor. No one ever said Seattle didn’t have the factors that make it relevant (jobs, schools, and housing), just how much more desirable though is it to SF is my thing and while you may not like it but I would take our fog over persistent rain any day of the week.

It won’t be equal. If it gets too close in price, then demand for the Bay Area will go up.

Think of it as comparing Palo Alto and Fremont. Palo Alto will always command a premium. If Fremont gets too expensive, people will realize Palo Alto costs just a little bit more and prices will get bid up with more demand.