As I was updating my table on 2018 numbers, the 2019 numbers suddenly became available. For previous discussions on Berkeley admissions number follow these two older threads:

Saw this from a friend’s WeChat post. The first column is ratio out of all students, the 2nd column is out of the school’s Asian students. First table are some well known private schools: [image] I don’t know Valley Christian, Crystal Springs and St Francis. The top privates in SF are also missing. It’s a list for Valley people. Next table are public schools: [image] [image] Evergreen High better steps up its game! My property value depends on it…

This is an update to this old thread: UC Berkeley Admission Stats I only looked up a few high schools that come to mind, some private and some public. You can look up the stats here: Admissions by source school | University of California I sorted the table in descending order of admission percentage. Schools like Paly and Monta Vista seem pretty underwhelming. Mission San Jose and Burlingame are the top dogs. Capuchino is an outliner in that the applicant number is quite small. Maybe kids there were discouraged from applying? [image]

Even if you don’t care for Berkeley, I think the admission numbers can serve as a proxy for school and students quality. I’ve included some Pleasanton area public schools in the table. Also, some notable private colleges that didn’t show up in the 2018 count appeared in 2019, like Crystal Springs and Nueva. 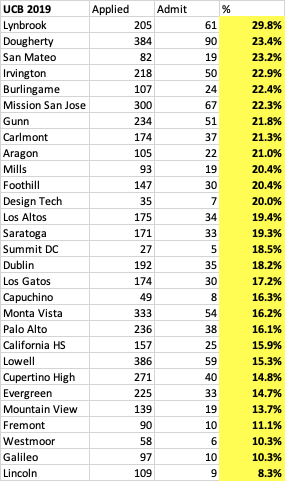 Lynbrook is very strong, but Dougherty and Irvington are not bad either, for a fraction of housing costs. 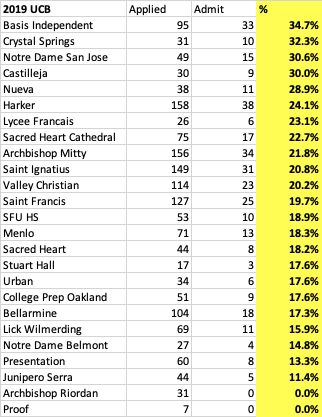 Again, why is Lynbrook so far ahead of Monta Vista?

So it has nothing to do with Berkeley. Maybe MV is just a worse school?

Early decision is not included?

The previous owner where I bought the SFH from bought a new house in WSJ claiming Lynbrook has special course. When I ask him, he hesitated to tell me. So, is something special but may not be a course.

PA and MV are supposedly very good high school but admission rates are much lower than Lynbrook. Lynbrook knows the trick.

Early decision is not included?

PA and MV are supposedly very good high school but admission rates are much lower than Lynbrook. Lynbrook knows the trick.

Based on my experience, i don’t think school knows any trick on college admission. Lynbrook parents may?

I updated the table with average home prices (in millions) on Redfin. It’s the average of house prices on the market right now. Best bang for the buck is Dougherty and Irvington. Monta Vista is 300K more expensive than Lynbrook but acceptance rate 13 points lower. Mountain View is waste of money. 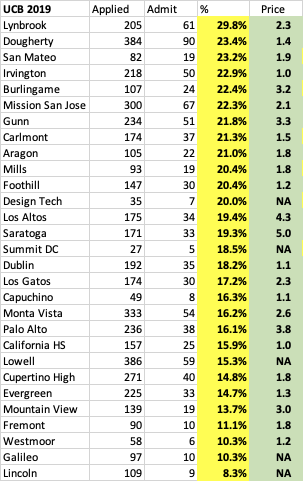 Too much data. Starting to look like the Iowa caucuses. Atherton is the most desirable address. Not even mentioned. The super rich don’t care about public schools, I guess.

Who go to public schools in Atherton? Or Hillsboro?

Hillsborough has great public schools! Atherton…not so much.

Which university is more difficult: UC Berkeley or Stanford?

I got my BS in EECS from Cal and then proceeded to get a Ph.D. in CS at Stanford. While both were very positive experiences, the cultures at the two are very different.

When I first started at Stanford, the one sentence difference that stuck in my mind was that at Stanford the university likes the students. Let me highlight with a few stories.

My first semester at Cal, I took an honors class in math with 20 to 30 students (it’s been a while so I don’t remember exactly). The Professor had been living in the US for 20 years, yet still couldn’t speak or write English; the lesson on Hook’s law drew a lot of laughter when he wrote and pronounced Fuk’s law and couldn’t understand why everyone was laughing. Before the first midterm, he explicitly told the class that there would be no curve; an A would require 90%. Out of 15 points, the class average was 5. Since there was no curve he let the students retake the test. Despite giving us the exact same questions, the average only went up to 7. Now the kicker, he returned the results the day after the deadline for dropping the class. While half the class wanted to switch to the regular class, a rule was a rule and none could.

Upper division classes at Berkeley were nicer but more work. One class had two separate assignments that required working in the lab until 4 AM on the day following an all nighter. Tons of work but not busy work. We were building real systems and that’s what it takes to make them work.

Now let’s switch to Stanford. One day I get a parking ticket for $14. I didn’t bother to pay it. A month later I get a threatening note that because I didn’t pay on time, the fine was now going to be $13.

One of the first classes I took at Stanford gave two programming assignments the entire quarter. One was very easy and one was average, not even close to the Berkeley project. The following year, I shared an office with the TA of the Stanford class. The professor walked in and told the TA that students were evaluating his class as too hard, and the administrating told him that if he didn’t improve his evaluations, he would not get promoted from Associate to full Professor. Therefore, the professor was dropping the second assignment. I can’t imagine such a conversation in Berkeley.

So, which is harder, Berkeley no doubt. Which is better, it really depends on what you need. Both have very smart students: at the top end the students are very similar, at the bottom end there are more such students at Berkeley. Both have great professors. Berkeley will try to break you, although mostly just in the first couple of years. If you make it through the hazing, Berkeley is a wonderful place that will challenge you like no place else and prepare you for the real world. If you don’t survive the hazing, and many don’t, you will drop out.

Stanford will expose you to the best professors and the best students. You will make great connections. If you are self motivated, you will learn a lot. If you are not, you will coast through.

Long story to say what I said in a few words.

Very interesting data. College acceptance data is not readily acceptable. So even if reader does not care for UCB, this data is a good reference.

I’m also surprised that % acceptance for Monta Vista and Palo Alto high schools are so much lower than Lynbrook and Gunn.

Notice that MV has higher house prices than Lynbrook, and Paly in turn has higher house prices than Gunn. So maybe there are more rich parents in MV and Paly areas, and they choose to put their kids in private schools at a greater rate. So MV and Paly suffer from a “brain drain” so to speak. The kids with more financial resources got diverted to private schools instead of staying with public, and these are the kids who ace all the exams and got admitted to top notch schools.

How was I rejected from Georgia Tech and do I have a chance at other top Comp sci schools (Berkley, UCLA, San Diego, Cornell, Columbia)? I have a 1540, 4.0 uw, 4.4 w, and decent EC’s. Was also rejected from UIUC CS? Don’t understand what went wrong?

You didn’t get lucky.

I’d estimate that Illinois got about 6000 applications for the Engineering CS major this year, for a target incoming class of about 250. Out of necessity, the university must reject applicants who are extremely highly qualified, applicants who would excel in the major, including valedictorians with perfect GPAs and perfect SATs and ridiculous extracurriculars and successful startup companies. Our classes are overflowing. We. Are. Full. We are hiring new faculty as fast as we can, but so is every other CS department. We cannot admit everyone that we really really really want to admit.

It sounds like you are more than qualified, but beyond that, it really is best to think of the admission process at any particular university as random . There is nothing you can do to guarantee admission to the CS program at Illinois. I imagine the same is true of every top CS program, including all the programs you list.

“Random” doesn’t mean totally out of your control. Maybe your extracurriculars look pro forma, with lots of participation but no clear evidence of leadership . Maybe your essay had lots of spelling and grammar errors, or even just a single annoying “you’re” instead of “your”. Maybe you came across as arrogant, or immature, or greedy, or entitled. Maybe your essay for Illinois didn’t say enough about why you want to study computer science at Illinois , as opposed to just wanting to study computer science somewhere, or just wanting a degree from a generic “top CS program”.

On the other hand, maybe you come from a high school whose alumni have a poor track record of success at Illinois. In particular, maybe you’re the first student from your high school to apply to Illinois, so your high school no track record at all. Or maybe the admissions counselor read your file just before lunch, when they were hungry and still cranky about the barista screwing up their morning wake-up juice.

Unfortunately, if your heart is set on a top-10 or even top-20 CS department, the only way to compensate for admissions randomness is to apply to more places, and don’t get too attached to any particular place before you’re admitted.

He is definitely no Jack Ma.

Keep in mind that CS applicants with 1540 SATs and 4.0 UW GPAs are a dime a dozen. They could fill the college class 5 times over with those.

I wonder if more people will say screw college and do a coding bootcamp. They seem to have room in them, they are much quicker, and much cheaper.