Saw this from a friend’s WeChat post. The first column is ratio out of all students, the 2nd column is out of the school’s Asian students. 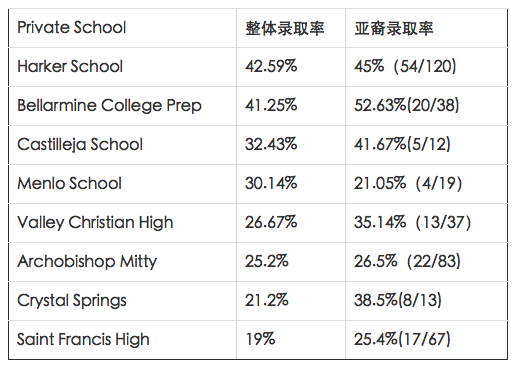 Next table are public schools: 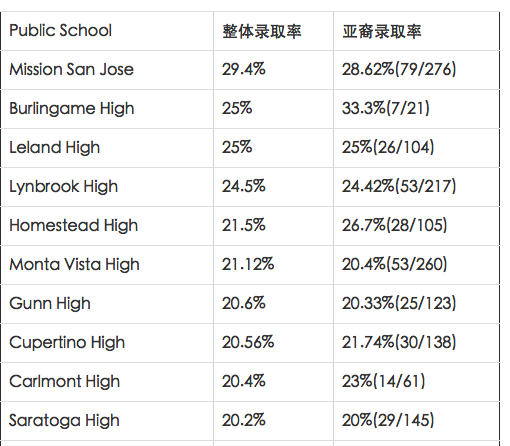 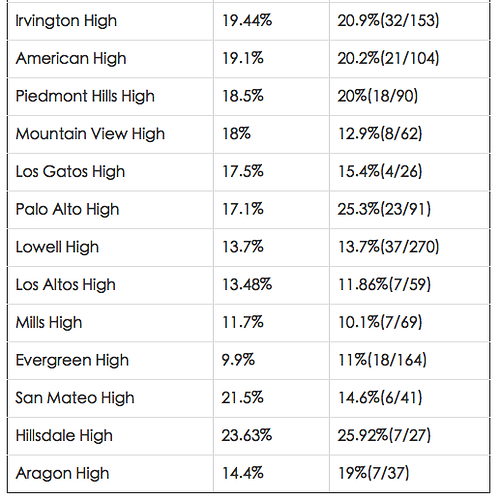 Evergreen High better steps up its game! My property value depends on it…

True for most schools. Some have bigger gaps: Paly has way more Asians get in, MV swings the other way.

This table would benefit from also showing class sizes. It’s just computing the admit # out of # of applicants, but some schools may have more self-selection of who attempts to apply. Very interesting results still. Didn’t realize what a gem Mission San Jose is.

I think the most surprising is Piedmont Hills High. It’s in the Berryessa part of San Jose, i.e. North San Jose. Houses are relatively affordable there. North SJ is also seeing a lot of growth in office space. Big techs like Apple is aggressively expanding in that area. Samsung just set up a brand new campus there as well.

According to this one metic, Piedmont Hills beats much pricier areas like Los Gatos and Palo Alto.

According to this one metic, Piedmont Hills beats much pricier areas like Los Gatos and Palo Alto.

That’s hard to judge. It’s possible most Palo Alto parents whose kids would easily get into Berkeley applied to Ivy League colleges instead.

Oh, yes, big time. My big bro was telling me this even many years ago that if you had the most rundown, small house in Mission San Jose of Fremont you would have no problem selling for max dollar as the schools there are the draw. And looks like Irvington is not too shabby too in getting kids to Cal.

Fremont is so freaking hot that I am so glad I picked up that 3/1 SFH there for under 500k. I get all of the sales reports from Trulia/Zillow/Redfin for my neighborhood there and it looks very promising. The thing is, the quality of the people moving in there is so high that all the schools will improve. Proximity to Tesla and other high tech companies in the region makes Fremont a great spot to look for investment property.

I’m surprised to see no schools from the 680 corridor or lamorinda- lafayette, san ramon, pleasanton all have top schools.

UC Berkeley is no longer popular. Second choice for those able to go to Ivy and top league. Amongst UC, Davis is preferred over UCB.

I’m surprised to see no schools from the 680 corridor

I think the table is put together by some real estate agents in the valley. Maybe she doesn’t cover those towns along 680. You can easily roll your own stats with the data source.

Ok I have to refute that claim 150% and I am not a Cal alum. The fact is, UCLA, for a number of years now has received the most undergrad applications of any school. Even I have to give the nod to Big Bro Cal. To go even further, in my day, Davis was #3 but now, I understand San Diego may have passed Davis for that spot. Honestly, Davis is not in the Big 3.

Honestly, Davis is not in the Big 3.

Right. A friend who went to UCLA constantly goes over how old and crappy UCLA’s buildings are, and how great and shiny UCSD is. The top 3 are Cal, UCLA and UCSD. Davis is in the 2nd tier. I am not sure it’s even No. 4. What about Irvine?

Well, a quick search on the good old internet brought this up:

Yeah, Davis is surprisingly not even 4th according to this author (sorry, hanera):

A Comparison and Ranking of the University of California Schools

A list and ranking of the nine University of California Schools with undergraduate programs. Each school is linked to further admission data.

Regarding applications, too many articles mentioning UCLA as the top school for undergrad apps:

Yeah, private colleges and especially Ivy League schools are nice but at the end of the day, will you get a job? A good job? I don’t have a horse in the race (no kids) but the idea of spending upwards of what $300k now or more for an undergrad degree from some private college doesn’t make sense unless again one does something with the education like go to med school or something.

Right. A friend who went to UCLA constantly goes over how old and crappy UCLA’s buildings are, and how great

Hey, you mean my “big” yearly donation to UCLA is not making a dent???

Well, hopefully this will. UCLA just penned the biggest endorsement contract with Steph Curry’s Under Armour brand as its official shoe and uniform provider for many moons. Actually kicked Cal’s behind in terms of what it got, which granted was fewer years but way less cash.

I know what is being published. According to the high school that my son just graduated, students no longer interested in going to UCB. The top two is UCLA and UCDavis. The school shows us two list, one preferred by parents and the other preferred by students. Parents prefer UCB but high school graduates don’t want to go there.

Well, that may be true for your son’s school (congrats by the way) but the application numbers don’t lie. Cal is 2nd to only my Bruins in undergrad apps. The reality is, Cal is typically regarded as one if not the best public university or best bang for the buck university. UCLA girls are hotter though…

UCLA girls are hotter though

I thought USC is famous for that? You know it stands for …

Getting back to these charts—what no Asians in Menlo Park and Redwood City ? Don’t see any of the schools in there, but Carlmont and San Mateo is on there.

Use the data source to look at the schools you are interested in. For example, this is part of San Mateo county: 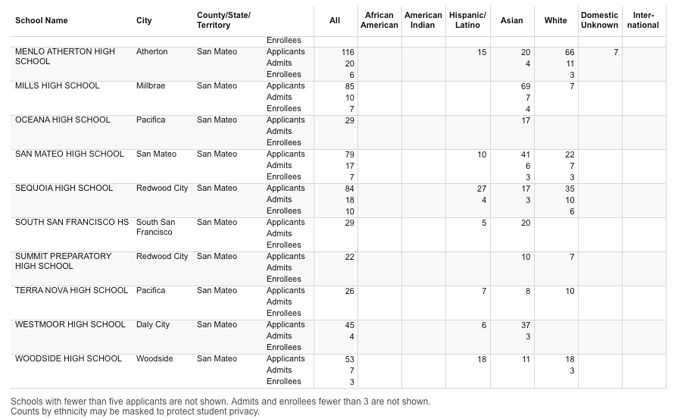 For Woodside High, 0% of the Asian applicants got in!

No one from the entire school of Summit got in.

0% for both HS in Pacifica…