Yeah, someone should have asked how many of those who died from 9/11 attacks had preexisting conditions and would have died in a year or two anyway. Instead of war on terror we should have war on obesity or something.

War on obesity in USA, good luck.
Obesity is glorified now a days just like many other things wrong.

The whole concept that obese people are a protected class has been destroyed by covid19. It is not PC just lethal.

Flu and covid are not the same. Pls check the below link
goodrx.com/blog/flu-vs-coronavirus-mortality-and-death-rates-by-year/

In the beginning of the pandemic I thought bodybuilders won’t die due to covid but 2 ppl in my known circle died. Even if the fatality rate is around 0.03% among young ppl, why risk it? What if our kid fall under 0.03%

What’s the alternative? At this point there’s no more hope of contact tracing it away. Right now, people are hoping to wait for a vaccine, but vaccines also have a fatality rate–one which is vastly underreported.

When you’re a parent, you have a choice–you can put your kid in a bubble or you can let them explore life. I have one kid that merits a bubble–she has a spinal abnormality that could cause her to be a quadraplegic. We draw a line at the things that can cause back injury–diving, skydiving, horseback riding, tackle football and gymnastics. But we let her play basketball, go biking, and play on the jungle gym. I’m not going to put her in a bubble–we’ll draw the line at some sane place and move on.

I love my kids, and I love myself, but honestly, I feel like I want people to have sanity and a normal life, friends, and school. I am worried about the teachers at one of the kids’ school–there are some which are high risk, and if it were possible to ask them to take some time off (or retire at 70), I would just do that. But teachers unions and all, I guess you can’t ask teachers to take the year off.

The thing that I keep mentioning that no one talks about is that keeping kids home is increasing their risk factors. All of us have gained 10 pounds since the shelter in place, that puts us even more into the obese range, and they’re not getting out in the sun and getting exercise. There’s increased eating since people are at home with full access to the kitchen. I am trying to at least supplement Vitamin D. At what point is keeping kids home from school actually increasing their risk of dying from Covid plus suicide and child abuse? It’ll be really interesting to see how those stats play out. 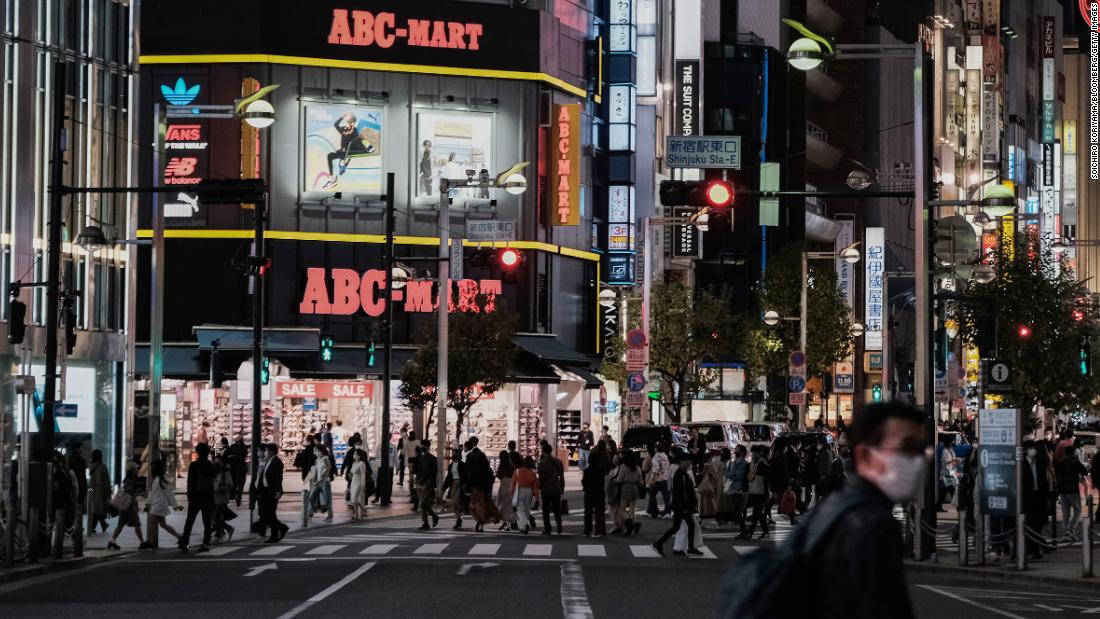 In Japan, more people died from suicide last month than from Covid in all of...

More people died from suicide in Japan in October than succumbed to Covid-19 all year. And more women are taking their own lives, as they lose part-time work and take on the bulk of family responsibilities at home.

Are you going to take the vaccine? If enough people refuse the vaccine will be ineffective

This is not correct. If the vaccine is effective, it’ll be effective for those who take it. What you’re referring to is herd immunity.

Vaccines all have different uses. Herd immunity is desirable to protect those who cannot protect themselves. But not all vaccines are used that way–elderly get vaccines against pneumonia and shingles to protect themselves, not others. Covid vaccines could be the same way–give them to those who want or need them who are higher risk, but let the younger group get natural immunity.

Yes and no…under highly controlled conditions the best mRNA vaccines are 95% effective. In the real world, when you look at protection over a period of say a year the rate of protection will likely be lower, let’s say hypothetically 70%. This means that if only the at risk population takes it, they still have a fairly high likelihood of catching Covid. Over a period of years, they will still get it, because it is still out there, widespread in the population.

Now if everyone takes it, you are reducing both their chance of getting it and their chance of being exposed to it because the prevalence will be dramatically lower in the healthy population. You are effectively reducing R0 and dramatically reducing risk. This is why it’s recommended that everyone get the flu vaccine even if they’re not at risk of complications.

Are you going to take the vaccine? If enough people refuse the vaccine will be ineffective.

If enough people refuse the vaccine => Why would they refuse except for their own ignorance?

Ignorance cuts both directions. Most people get vaccines without even reading the insert to make sure they don’t have a contraindication, and most nurses don’t read them either nor advise. Having gone back and read them, I’m shocked at certain times when my oldest kid was given a vaccine that was contraindicated. That should be malpractice, but doctors and manufacturers are protected from any lawsuits when it comes to any childhood vaccine by the 1986 National Vaccine Injury Act.

If people were making proper medical decision making, they’d view each vaccine as a medical decision, weight the pros and cons, and decide what is best. You don’t just get surgery because it’s available to you, you get it when the pros outweigh the cons. Some people are more prone to vaccine injuries and would rather deal with the disease than the vaccine injury. Depending on the disease and your particular risk factors, it might make sense to opt for the disease, not the vaccine.

Also, vaccines alter your immune system, and some can make you more likely to catch other diseases. Getting the flu vaccine increases your, or at least children’s, risk of catching other respiratory diseases. So if you want to be sick fewer days, don’t get a flu vaccine. If you just don’t want the flu, but you’re ok getting a bunch of other stuff, get the vaccine. Though it’s pretty ineffective most years though, and everyone knows it.

Among children there was an increase in the hazard of ARI caused by non-influenza respiratory pathogens post-influenza vaccination compared to unvaccinated children during the same period. Potential mechanisms for this association warrant further...

“Among children there was an increase in the hazard of ARI caused by non-influenza respiratory pathogens post-influenza vaccination compared to unvaccinated children during the same period.”

This is why it’s recommended that everyone get the flu vaccine even if they’re not at risk of complications.

Who are the ones likely to have complications

Yes and no…under highly controlled conditions the best mRNA vaccines are 95% effective. In the real world, when you look at protection over a period of say a year the rate of protection will likely be lower, let’s say hypothetically 70%. This means that if only the at risk population takes it, they still have a fairly high likelihood of catching Covid. Over a period of years, they will still get it, because it is still out there, widespread in the population.

It’s more complicated than that. Vaccine immunity, just like natural immunity, is boosted by coming into contact with the virus and wanes without it.

For example, if you’ve had chicken pox, you get an immune boost when your kids get chicken pox or when you’re exposed to it some other way – this is why widespread varicella (chicken pox) vaccination increases the risk of Shingles in adults – adults are no longer being naturally reimmunized by being around kids who get it. It’s also why vaccines seem to have great effectiveness in testing but then are less effective when the entire population is vaccinated – people aren’t getting the immune boost from being exposed to the wild-type virus. This was especially true of the chicken pox vaccine because it was being tested on kids who were being exposed to wild-type chickenpox at school and therefore reinnoculated – it made the vaccine look highly effective…until everyone started getting it, and now you need a second booster… if not more…

So vaccination of the elderly and at risk populations against a particular coronavirus will be more effective if they are reexposed to it naturally.

If it’s mandatory, that means 33-49M people will experience significantly noticeable side effects. Who knows how severe those side effects will get across that broad of population will all sorts of pre-existing health issues.

Then there’s the issue that it takes 2 doses and people who experience the side effects will be less likely to get the second dose.

They admit the long-term side effects aren’t well understood but urge that we have to do something.

Some how I bet this will go much worse than imagined with a host of unintended consequences.

The people who’ve suffered from side effects have reported redness and pain at the injection site as well as fever, chills, muscle aches and headaches, he said, adding most people have no noticeable side effects.

Sounds like typical vaccine side effects, i.e. just your immune system kicking in and doing its thing to raise a defense against the pathogen, the whole point of the vaccine. As usual, the headline overdramatizes the news.

Some how I bet this will go much worse than imagined with a host of unintended consequences.

Is why I am not taking the vaccine. I have bad reaction to vaccine.

agreed with every pharma drug there are side effects for a small portion of population, that’s why in every commercial you hear them rattle off a host of things that sound worse than the condition it’s treating but they legally have to disclose even if it happened in 1 out of thousands of people…this isn’t anything new to be freaked out about

Lol at people spinning side effects when it’s 10-15% and who knows how many will die when you apply this across BILLIONS of people. All so we can stop a virus that kills 0.2% of those infected.

10–15% are tired or have a sore arm. About the same as the flu vaccine…whoop-de-doo…

Also vaccine side effects are usually highest following the first exposure and decline thereafter (already have immunity so it is just a booster).

Comparison of Side Effects of the 2015–2016 High-Dose, Inactivated, Trivalent...

We will see the impact when the sample size increases to billions. I’m betting there will be massive unintended consequences.

I can argue 80% of covid cases are asymptomatic. So what’s the big deal about covid?

So now you are also an anti-vaxxer? California mandates all school children to be vaccinated of all sorts of illnesses. How many has died vs how many lives have been saved? As far as I am aware nobody even says Covid vaccination is mandated. I don’t understand where’s the controversy.

I’m not anti vaxxer bit it’s naive to think there won’t be massive unintended consequences with a population size of billions. The fact people just shrug it off is honestly terrifying. There’s zero desire to discuss the trade offs and consequences. People pretend it’s all upside with zero risk.

Roll out will actually be much slower than most assumed. I saw a ridiculous forecast by Goldman saying half the country will be vaccinated by mid 2021. That’s just pipe dream. There are logistical constraints and most non-frontline people will likely take a more wait-and-see approach. If there are any “unintended consequences” we will know very soon before most people have taken the vaccines.

This is one survey result: 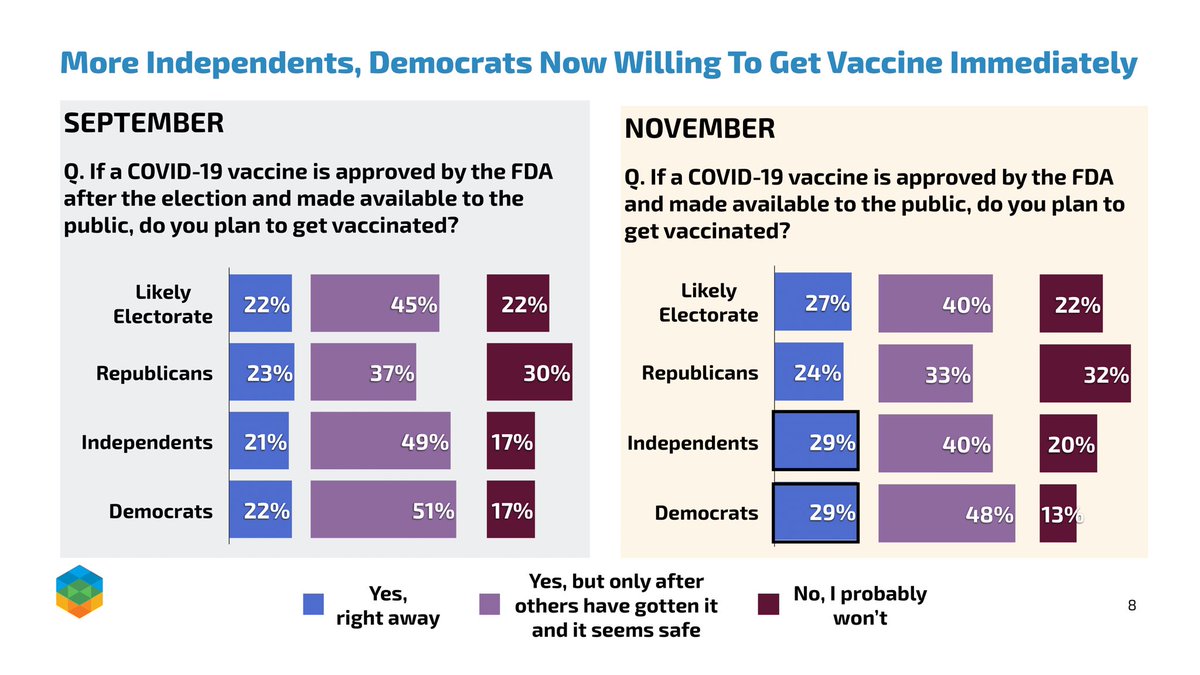 BTW China has been vaccinating its people with their own vaccines for months now and their vaccines haven’t even cleared Phase 3 trials. That’s the true horror show. But AFAIK nobody has gotten seriously sick over there. Not sure if it does anything against Covid either. Our stuff has gone thru much more rigorous vetting.