What’s behind that scary 9.1% inflation number? 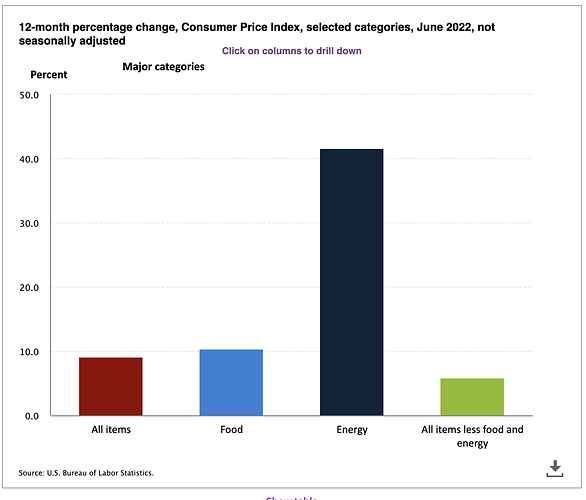 Energy will subtract from CPI numbers next year as we lap around the crazy increase due to the Russian invasion. So much for “secular” inflation.

You realize inflation was <2%. The 5.9% is still much higher than our recent history. The fed’s target is 2%, so it’s almost 3x the target.

Macro economics is too complex a topic for me to do prediction on. I have only taken one introductory topic on Economics and one of my textbooks was this book.

Hence, I only listen and learn from non idealogue/reasonably balanced Economists who have the requisite Education + Training + Professional_Experience + respect_in_professional_circles + record_of_accurate_predictions, and let such people do the talking

One ideologue Nobel Prize winning Economist who has been wrong again and again, and was wrong recently again on inflation is Paul Krugman and I avoid listening to him in spite of his “credentials”.

@
Trying to clarify my own thoughts on inflation. I got inflation wrong; I didn't see the current surge coming. But why? I didn't think the fiscal stimulus early this year would boost demand as much as Summers et al predicted ... and, in fact, so far it hasn't 1/
manch July 16, 2022, 1:36am #1327

The 5.9% is still much higher than our recent history.

I am not saying it’s low. But to say that the Ukraine war has little effect on our own inflation? I don’t see any data that supports that claim.

Similarly, I am not saying Biden’s 1.9T stimulus or Trump’s even bigger 3T stimulus has no effect on inflation. But I don’t think it’s the biggest driver. Because high inflation is a world wide phenomenon.

Inflation is a complex thing. Pointing a partisan finger at Biden’s stimulus as the only cause, while simultaneously saying nothing on Trump’s even bigger stimulus, doesn’t sound credible to me.

You’re been trying to claim the inflation is due to the war. It was happening before the war. Oil broke it’s pre-covid high in July, 2021.

Food price increases started to accelerate around the same time:

In depth view into US Consumer Price Index: Food including historical data from 1947, charts and stats.

As for the stimulus, I shouldn’t have to point out the timing of them relative to GDP growth and unemployment rates.

Biden could solve inflation but is paralyzed by woke bullshit. He could drive lumber prices down by allowing more logging. Oil down by allowing more drilling. House prices down by removing all the environmental laws designed to stop development. But he won’t because his peeps don’t give a crap about the middle class, only their elitist anti global warming agenda that will absolutely no effect on global warming. It will only make America weaker and China stronger.

You’re been trying to claim the inflation is due to the war. It was happening before the war. Oil broke it’s pre-covid high in July, 2021.

Zoom out a bit

From your “pre-covid high” of $80 to the highest of $120 this “secular inflation” cycle is still 50% increase. And you are telling me the war has nothing to do with inflation?

$80 was around where the price was around Jan this year, when the US started sounding the alarm bell on Russian invasion almost daily and broadcasting every movement the Russian troops made.

I never said inflation is entirely due to the war. But to claim that the war has no part in it is ridiculous.

Biden could solve inflation but is paralyzed by woke bullshit.

Yup. Biden can solve all the world’s inflation by himself. Nothing Putin does has any effect. Not even the Fed. Just Biden alone can tame inflation worldwide.

Do you think 2014 has relevance? Oil was around $60 pre-covid. As you admitted, it was already $80 or up 33% before there was any hint of Russia invading Ukraine. It just continued on that trajectory. This up there with your claim that Biden hasn’t done anything to impact oil prices.

He won’t even try. He wants to bankrupt the middle class and create a slave proletariat class. Even Nixon put in wage an price controls. Biden is an incompetent bum and a lying ass. Yes he can make lumber oil housing food prices go down. But he doesn’t want to.
Remember Obama said never underestimate Biden’s ability to fuck things up. No morals no agenda except to pander to race baiters and wacko environmentalists.

The president's pledge comes after Sen. Joe Manchin, D-W.Va., told Democrats that he won't support the climate provisions in the reconciliation bill.

We can all expect this to make oil prices lower. Lol. 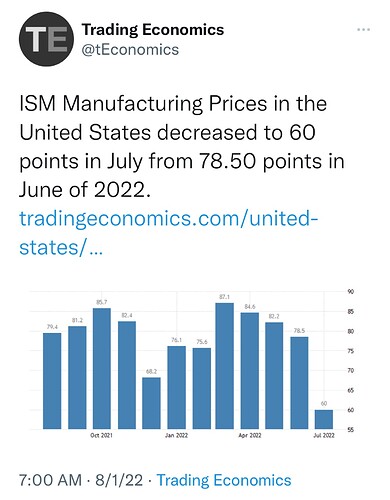 Port of New York and New Jersey is adding fees on containers and export levels as a way to deal with congestion that slowed productivity and has taken capacity.

Just more info that points to a collapse of inflation as retailers will be forced to discount and clear massive amounts of excess inc story. I have no idea how inventory levels were down yr/yr according to GDP data. It has to be the value per unit is less, because the number of units had to be higher. We’re literally running out of space to store all the inventory and some are still claiming missing sales targets is due to supply chain issues. I think companies missing sales numbers will be the worst hit by inventory clean up via discounting. 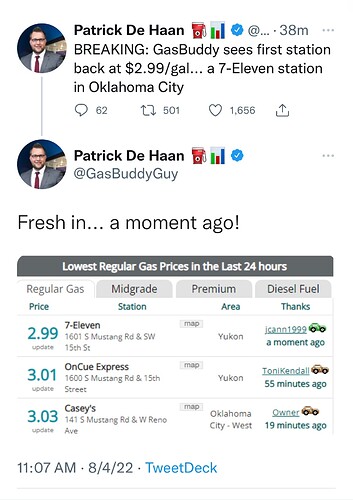 National average gas price is just a hair north of $4. Getting a 3 handle any day now. 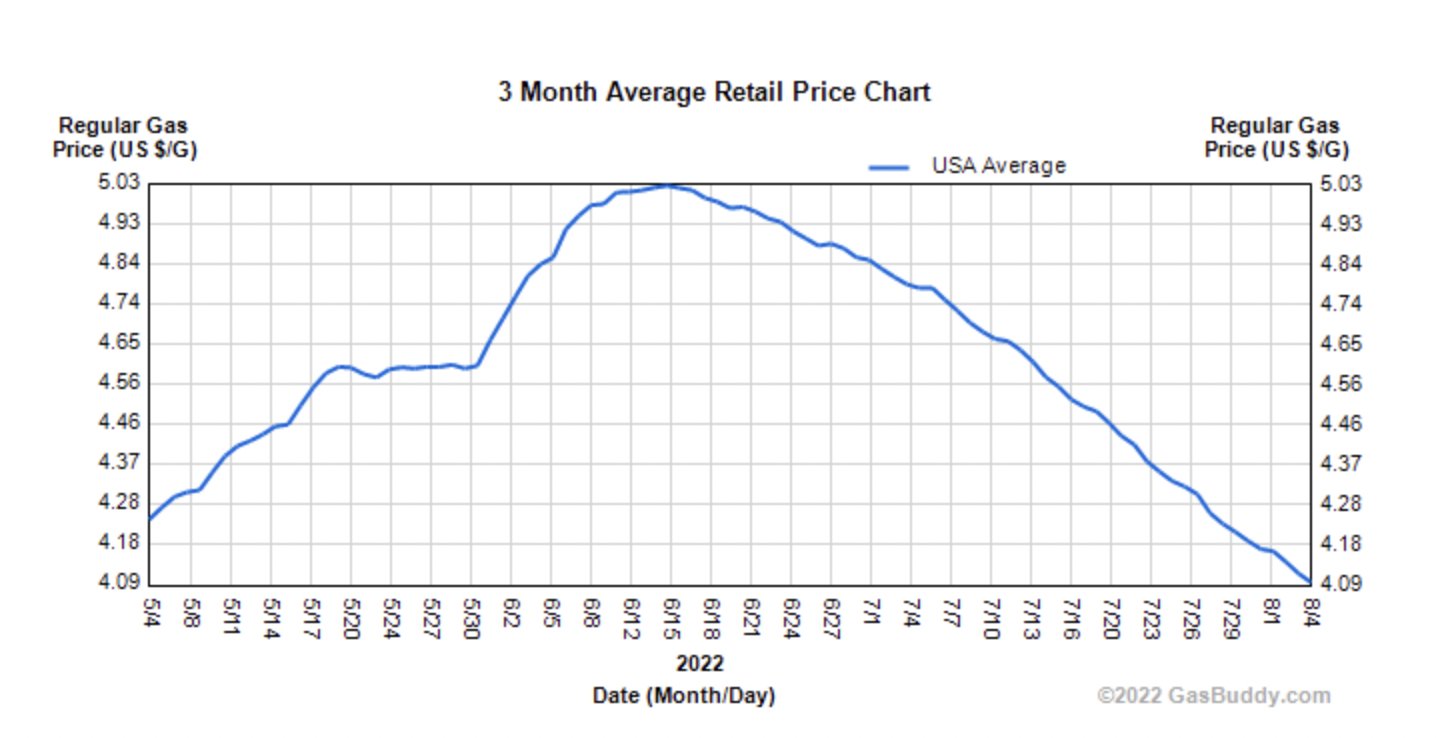 If inflation is declining fast, what would Fed do in Sep mtg?

Does falling inflation also mean asset price inflation will also fall and prices will get back to pre pandemic levels? That will be a disaster.

Yes, short everything, and you’ll become a billionaire.